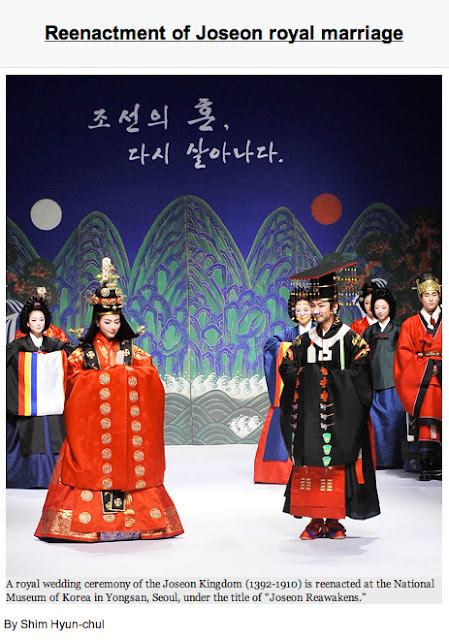 Following up briefly on a earlier post about France's return (as a loan) of Korean royal archives (Uigwe) that were seized by French forces in 1866, the Korean Times has a piece on a reenactment at the National Museum of Korea of one of the Joseon-era royal weddings depicted in the returned Uigwe.

The Times article has a number of pictures of the elaborate ceremony by Shim Hyun-chul and the following description:


For a court wedding, the Joseon Kingdom employed several thousands of people over several months to organize the procedure of six aspects of the wedding ceremony. The procedure comprises "napchae," "napjing," "gogi," "chaekbi," "chinyeong," and "dongrae." For instance "napchae" indicates sending a messenger with a formal proposal letter to the future queen, while the "chaekbi" step is the crowing of the future queen and "dongrae" means the consummation of the royal marriage.