The Legacy of the 2006 "Operation Iraqi Freedom" Doc Dump

This post briefly revisits some of the highlights from the U.S. government's remarkable act of uploading thousands of captured Iraqi documents (the so-called "Operation Iraqi Freedom Documents") to the website of the U.S. Army Foreign Military Studies Office (FMSO) from March until November 2006. 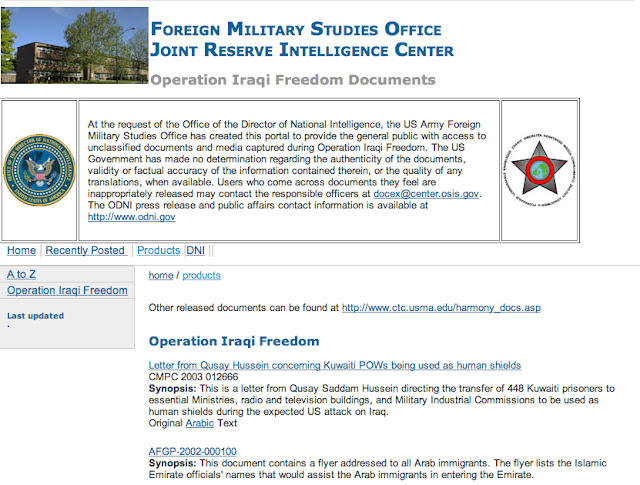 The drive towards this unprecedented doc dump arose in earnest in late 2005 and early 2006 when the continuing public debate over the justifications for the 2003 Iraq invasion turned towards the possibility of untapped evidence in the captured documents from Iraq.  Could they contain, for instance, "smoking gun" evidence of links between Saddam and al-Qaeda?  Stephen F. Hayes at the Weekly Standard, for example, had an impressive series of pieces during this period on his attempts to obtain access to some of the captured Iraqi documents both via the Pentagon press office and via repeated FOIA requests. He also covered growing calls in Congress for the release of the material.  See in particular his "Where Are the Pentagon Papers?" in November 2005, "Down the Memory Hole: The Pentagon sits on the documents of the Saddam Hussein regime" in December, and both "Saddam's Terror Training Camps: What the documents captured from the former Iraqi regime reveal -- and why they should all be made public" and "Read All About It: Prewar Iraqi documents are of more than academic interest" from January 2006.

In March 2006, both then-Rep. Pete Hoekstra and then-Sen. Rick Santorum took action by introducing nearly identical bills in the House and Senate that required the "Director of National Intelligence to release documents captured in Afghanistan or Iraq during Operation Desert Storm, Operation Enduring Freedom, or Operation Iraqi Freedom."  Those bills were H.R. 4869 and S. 2408, respectively.

The mere introduction of the bills proved to be sufficient. Shortly thereafter, the Office of Director of National Intelligence announced the initial public release of captured documents and briefly mentioned a "risk management approach" designed to "minimize the chance of releasing information which may damage U.S. national security, the privacy of U.S. persons or innocent foreign nationals":

As a N.Y. Times headline accurately summarized soon thereafter "Iraqi Documents Are Put on the Web, and Search Is On."  The Times quoted Rep. Hoekstra saying he wanted to "unleash the power of the Net" and the doc releases certainly did inspire a lot of activity. Several bloggers began preparing their own translations and conclusions (see, e.g., the translations posted here).

The Times stated that the "growing crowd of bloggers and translators" were "almost exclusively on the right" politically and they were looking for evidence of WMD or ties between Saddam and al-Qaeda.  It seemed, however, that there was something for everyone in these documents. Juan Cole at Informed Consent, who wrote that the "Right Blogosphere was Scammed by Bogus Document Dump" and stated that the "notorious liar, Stephen Hayes of the Weekly Standard led the charge," later utilized another released document himself which he argued indicated that, despite claims that Abu Musab al-Zarqawi was "a client of Saddam," Saddam had actually been trying to arrest Zarqawi "as a danger to the Baath regime" (a copy of the document on which he relied, ISGZ-2004-19920, and a government translation are here and here).

Like the release of Wikileaks cables years later, diplomatic consequences from the release of the Iraqi documents soon, and predictably, followed. ABC News, for example, asked "Did Russian Ambassador Give Saddam the U.S. War Plan?" in reliance on, among other documents, CMPC-2003-001950 (the original is available here) which it summarized as


a handwritten account of a meeting with the Russian ambassador that details his description of the composition, size, location and type of U.S. military forces arrayed in the Gulf and Jordan. The document includes the exact numbers of tanks, armored vehicles, different types of aircraft, missiles, helicopters, aircraft carriers, and other forces, and also includes their exact locations. The ambassador also described the positions of two Special Forces units.

In April 2006 the Oversight Subcommittee of the House Committee on International Relations held an informative hearing called "The Iraqi Documents: A Glimpse Into the Regime of Saddam Hussein" in which the released captured documents were discussed at length.  The hearing included an interesting back-and-forth debate about the released documents regarding Russia between Rep. Rohrabacher who stated that he thought


it is a great idea for us to disclose all that information about Russians' involvement with Saddam Hussein. In fact, we should disclose all these documents . . . we shouldn't be trying to protect the Russian intelligence from some sort of embarrassment whatsoever.

and Rep. Schiff who responded that


In terms of disclosure of documents, that is wonderful, but it is not to protect the Russians that I am having a concern about this. If this information turns out to be patently false, then we have needlessly damaged our relations with Russia. That hurts us. That doesn't just hurt the Russians. We want Putin's help right now on nonproliferation with Iran. . . . It is not worry about Russian sensitivity. It is worry about our own national security interest.

The hearing also featured a memorable, and prescient, line from Gen. Anthony Cucolo: "a document is a dangerous thing."

As documents were released, the DOD Harmony database of captured documents was apparently annotated accordingly.

As time passed, the release of the documents on the FMSO portal increased. According to a footnote in the excellent recent book "The Saddam Tapes," the government uploaded a total of "approximately eleven thousand records" to the internet. 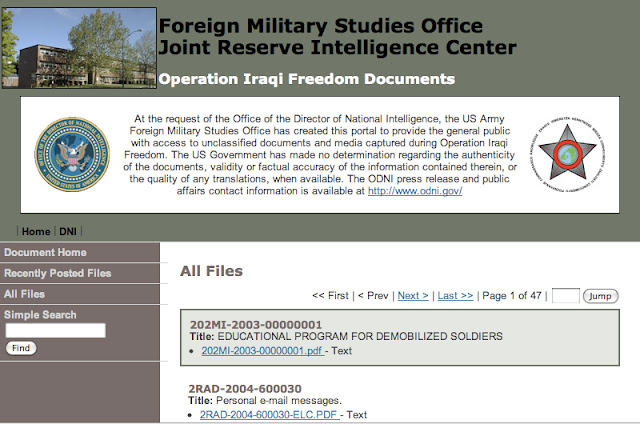 In early November, however, the experiment ended abruptly.  On November 3, 2006 the New York Times reported "Web Archive is Said to Reveal a Nuclear Primer." The article noted that the web site had posted documents "that weapons experts say are a danger themselves: detailed accounts of Iraq's secret nuclear research before the 1991 Persian Gulf War. The documents, the experts say, constitute a basic guide to building an atom bomb."  The article noted that the site had been shut down the previous night after the Times "asked about complaints from weapons experts and arms-control officials" and reported that:


Officials of the International Atomic Energy Agency, fearing that the information could help states like Iran develop nuclear arms, had privately protested last week to the American ambassador to the agency, according to European diplomats who spoke on condition of anonymity because of the issue's sensitivity. One diplomat said the agency's technical experts "were shocked" at the public disclosures.

The documents reportedly included "charts, diagrams, equations and lengthy narratives about bomb building that nuclear experts who have viewed them say go beyond what is available elsewhere on the Internet and in other public forums." The FMSO portal was closed and never reopened, although that did not, of course, necessarily mean that documents uploaded (and downloaded) during the nearly 8-month project were no longer available (more on that in a later post). 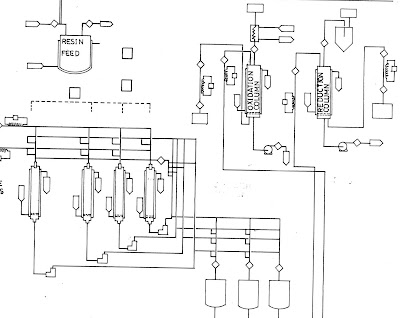 In the end, one could condemn the Iraqi Freedom doc dump as an irresponsible, and politically motivated, threat to national security and suggest that it could have even contributed to Iranian nuclear advances. One could also juxtapose statements by certain politicians in their advocacy for the wide release of the Iraqi documents alongside their more recent condemnations of Wikileaks for creating some strikingly similar diplomatic and national security issues.

As always, however, the risk of overreaction is significant and if the legacy of the "Iraqi Freedom documents" experiment is that the government became even more paranoid about releasing documents it would be unfortunate.  The declassification and release of government information is frequently bogged down because of too many layers of review (see, e.g., this recent post on Unredacted).  The captured Iraqi doc dump had one layer too little.  The search for the elusive middle ground that appropriately balances transparency with security should not be abandoned.
at 4:44 PM
Email ThisBlogThis!Share to TwitterShare to FacebookShare to Pinterest
Labels: access, armed conflict, intelligence, Iraq, Saddam, seized documents
Newer Post Older Post Home