A fascinating amicus brief (thanks Lawfare) was filed last week in the appeal of the military commission conviction in Bahlul, a case which raises a variety of issues relevant to online propaganda videos, captured documents, open source intelligence, and the First Amendment.

As brief background, a central charge against Bahlul is that he created propaganda videos as part of an al Qaeda conspiracy to commit terrorism. The videos include the State of the Ummah from early 2001 (available online as part 1 and part 2, a translated transcript of the video, which was assigned DoD Harmony number AFGP-2002-905880, is available here). Bahlul was convicted and sentenced to life in prison after objecting to, and then boycotting, his military commission.  He used this sign in court to make his intentions clear: 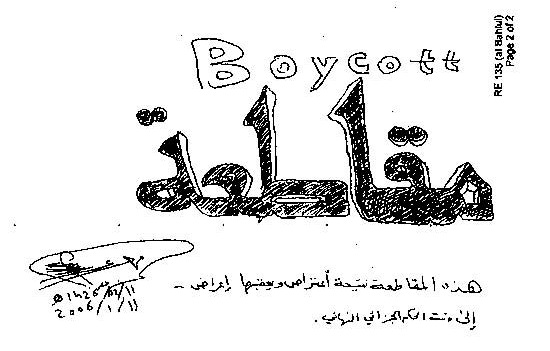 On appeal, his lawyer argued that convicting Bahlul based on an online propaganda video meant he was "convicted on the basis of political speech in violation of the First Amendment."  In September 2011, the U.S. Court of Military Commission Review (CMCR) rejected this argument by holding that Bahlul, as a noncitizen acting abroad when he made the video, did not have First Amendment rights and that, even if he did, the video constituted an "incitement to imminent lawless action" and was "unprotected speech integrally tied to unlawful criminal activity."

The case has now been appealed to the D.C. Circuit Court of Appeals. The amicus brief linked above was filed on behalf of a group of former members of the U.S. intelligence community in support of Bahlul's First Amendment argument, but from an intriguing angle.  The brief argues that if the U.S. criminalizes the mere act of terrorist organizations posting propaganda videos or documents to the internet, it would adversely affect U.S. intelligence operations, which rely heavily on exploiting such videos and documents as "open source" intelligence.  It argues:


Failing to apply First Amendment protections to the propaganda video created by [Bahlul] limits the free flow of information and interferes with Americans' right to know. Furthermore, it does a grave disservice to our national security because of the chilling effect it would have on the generation and receipt of information relied upon by the Intelligence Community.

In relation to the State of the Ummah video at issue, the brief notes that it "expresses the motivations of and identifies key figures in al Qaeda" which is information that is "valuable open source intelligence" and that the "future dissemination of valuable information such as this should be encouraged and, at the very least, not prevented." The brief quantifies the substantial reliance on open source intelligence noting that an "estimated 80-90% of all collected U.S. intelligence comes from open sources."

How that intelligence is assessed and used is another issue. The Bahlul case is particularly noteworthy because it involves both "open source" evidence, such as the internet video, as well as a variety of captured documents, a couple of which I have previously posted (here and here).  The distinction between documents and media designed to be public, on the one hand, versus those that are private - but which are captured and exploited - on the other, is rich with complexity. This is true whether they are being used for intelligence operations, as evidence in court proceedings, or in archives for historical research.

In the preface to the Terrorist Perspectives Project, for example, the authors dismiss concerns over the possibility that open source "jihadi" material on the internet, on which their study relies, could be deliberate "disinformation" by arguing that "the enemy’s public discourse matches its private discourse as revealed in captured documents" and on the basis that if the "enemy" was attempting to "mislead 'infidel' analysts" the "enemy" would "inevitably mislead its own members."  Meanwhile, Col. Joseph M. Cox (no relation) in his fantastic 2010 article "DOMEX: The Birth of a New Intelligence Discipline" (thanks Secrecy News) argues that captured documents can be more reliable than some other sources of intelligence:

The true significance of DOMEX lies in the fact that terrorists, criminals, and other adversaries never expected their material to be captured. The intelligence produced from exploitation is not marked with deception, exaggeration, and misdirection that routinely appear during live questioning of suspects.

Yet the level of sophistication, or lack of sophistication, attributed to "jihadists," "terrorists," and "al Qaeda" varies widely (and, in my view, dangerously).  One minute "terrorists" are accused of using sophisticated counter-interrogation techniques and communicating with each other via hidden messages encrypted in pornographic videotapes using steganography, the next minute "terrorists" are viewed as failing to prepare even for the highly foreseeable possibility that their documents could be captured.  An assumption that captured documents from any source are not potentially seeded with misinformation or that custodians of those documents were not utilizing information security practices that could render the pool of documents captured either non-representative or outright misleading seems suspect.

For historical perspective, see Harold Deutsch's 1995 article "The Matter of Records" in 59 Journal of Military History 135, which provides a series of entertaining historical examples of captured records and public documents that are either unreliable or intentionally deceptive.  Deutsch relates, for example, a discussion with someone whose correspondence was included in the U.S. State Department's publication of captured documents from the German Foreign Office Archives, who advised that his letters often "amounted to a code" which indicated to the recipient that "the letter meant the exact opposite to what seemed to be written" and that, if he had been given notice of the U.S. intention to publish the letters, he could "have given the Americans the code" to be "included in a footnote for the enlightenment of readers." See also Operation Mincemeat.

Finally, while we await the Bahlul decision from the D.C. Circuit, it is worth noting that the CMCR's September 2011 decision, while denying Bahlul First Amendment rights, helpfully clarified that its decision did "not adversely affect the rights of U.S. citizens" to view the propaganda video on the internet, which may be a relief for U.S. citizens that clicked on the video links at the top of this post (whew!) - according to Danger Room, however, if French President Sarkozy has his way, the same may not be true of French citizens in the future.
at 2:59 PM
Email ThisBlogThis!Share to TwitterShare to FacebookShare to Pinterest
Labels: Al Qaeda, authenticity, gtmo, intelligence, seized documents
Newer Post Older Post Home