Own a Piece of Captured Document History - Noriega's Business Card

Following up on an earlier post on Saddam's sword and war souvenirs, there is only about 24 hours remaining in an auction on MurderAuction.com for a "General Manuel Noriega original business card in great condition - This is not a copy."  Minimum bid is $49.99. 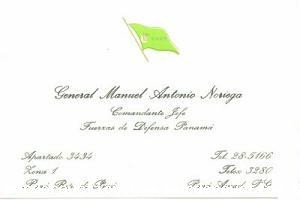 The issue of Gen. Noriega's business cards have a long history.  Not long after the December 1989 U.S. invasion of Panama, news stories began popping up about Noriega's business cards being sold in California for $10 a piece.  A Jan. 31, 1990 piece in the Ellensburg Daily Record, for example, stated that "Entrepreneur Joel Peterson" was selling business cards and stationary obtained from "the general's desk in Panama City." His brother, Army Sgt. Mark Peterson, reportedly "had been sent to Noriega's headquarters in the mop-up operation after U.S. troops stormed the compound."  Sgt. Peterson reportedly "gave his brother a signed, hand-written note certifying 'that these cards belonged to General Manuel Noriega and were personally acquired by myself at Noriega's office . . . on 22 Dec. '89 during operation 'Just Cause.'"  Morever, the article stated that according to Sgt. Peterson:


An Army policy announced during the Panamanian action allowed soldiers to take souvenirs as long as they were not weapons, drugs or anything that might have been used as evidence in criminal proceedings.

This did not escape the attention of Noriega's lawyers who had already been trying to ensure that the Government was preserving the documents seized in Panama for possible use in his defense to criminal charges in Miami.  On February 2, 1990, Noriega's lawyers filed this "Motion for Inventory and Return of Stolen Property" arguing that "soldiers ransacked General Noriega's residence and stole numerous articles of personal property belonging to General Noriega," that "one Joel Peterson, brother of Sergeant Mark Peterson, is selling stolen business cards of General Noriega in Southern California," and that this was apparently permitted by U.S. Army policy.

"Conduct of this nature, by the United States Army," the motion continued, "is reminiscent of ancient times when Attila the Hun and barbarians sacked and burned cities and later divvied up the booty among themselves."

The government's response in opposition to the motion denied that any property had been "stolen" and noted that the only specific item mentioned in Noriega's motion was "business cards, items which by their nature are meant to be distributed" and that "it is difficult to image what if any evidentiary value applies to the business cards."  In a classic U.S. government argument, the response stated that the U.S. "submits that to the best of its knowledge, none of defendant's property has been stolen" (emphasis mine) and that "[i]nsofar as any items may have been removed from those locations with the government's knowledge, they were removed in compliance with applicable military regulations and directives" without ever addressing whether such regulations or directives, as Sgt. Peterson and the original motion had claimed, allowed individual soldiers to take Gen. Noriega's property as war souvenirs.

More pressing issues soon overtook the Noriega case and the motion was later denied by Magistrate Judge Turnoff without comment in July 1990.  With time, however, the allegations in the motion have found additional factual support, not only in the ongoing auction, but in numerous stories over the years.  As just one example, see this account involving not only a business card and stationary, but even a "reproduction of an ancient map of the world produced on fabric" that a soldier "found in Noriega's office while his unit emptied the Panamanian leaders files" which later had "an honored spot on the wall" of that soldier's "Englewood home."  Another one of Noriega's business cards ended up, perhaps more appropriately, in the Business Card Archives founded in Iowa by Walter Day.
at 4:57 PM
Email ThisBlogThis!Share to TwitterShare to FacebookShare to Pinterest
Labels: Panama, seized documents
Newer Post Older Post Home