The debate over the documents obtained by the Iraq Memory Foundation from Ba'ath Party Headquarters in Iraq and that are now on deposit at the Hoover Institution at Stanford is epic.

Access to the documents at Hoover requires physically traveling to Stanford and signing an agreement available here, that, among other things, forbids "commentary for public use in print media or over the Internet that uses or quotes from the IMF Collection without prior written permission from Mr. Kanan Makiya of the Iraq Memory Foundation." There are certainly important and valid reasons for restrictions on access to, and disclosure of, these documents given that they contain, among other things, personal information on victims. Restrictions on access to government documents that require such personal written permission from a specific individual, however, seems a bit odd.  I was therefore interested in a detail in a Chronicle of Higher Education piece that said the following (emphasis mine):


According to Hassan Mneimneh, director of the Iraq Memory Foundation's documentation project, the group reached an agreement with the U.S. military in February 2005 to have the documents shipped to the United States, where government contractors would complete the digitizing process at a much faster rate. That agreement also provided for the U.S. government to keep a digital copy of the collection.

I had assumed the most likely government entity to hold that digital copy would be the DIA. Therefore I requested via FOIA last year a sampling of these records on the basis that, regardless of the ownership of the original documents, the digital copies in the possession of the government ought to constitute agency records within the meaning of FOIA.  Morever, access to the government copies would be governed by established FOIA standards for redaction and withholding rather than by the personal restrictions at Hoover.

After more than a year and a half, I finally received the response below indicating that "no documents responsive to your request were found."  Perhaps the search conducted was inadequate or perhaps the DIA is not the governmental entity that has custody of the digital copies after all.  Not knowing which specific agency has custody or authority over seized records is a recurring obstacle. 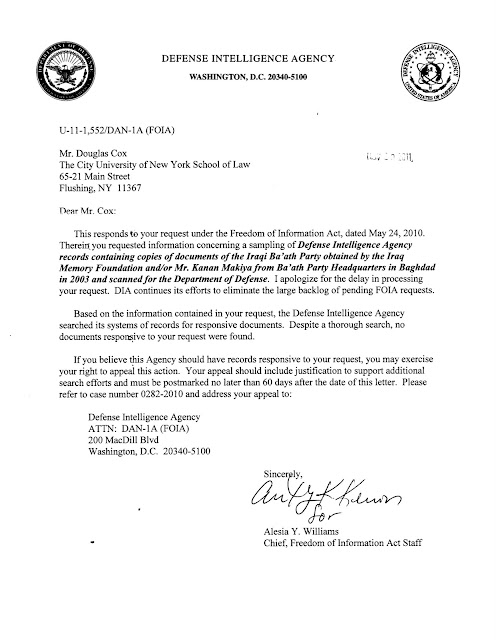