Captured Documents from Libya and a New Lawsuit in the U.K.

A lawsuit has been filed against the U.K. government by Abdel Hakim Belhadj (also known as Abu Abdullah Al-Sadiq), a commander of anti-Qaddafi forces in the recent conflict in Libya, based on documents captured in Tripoli indicating British (and U.S.) involvement in his earlier detention and rendition (apparently via Malaysia, Bangkok, and Diego Garcia) to Libyan custody in 2004.  Details on the lawsuit are available in this piece in the Guardian and this press release from Reprieve. 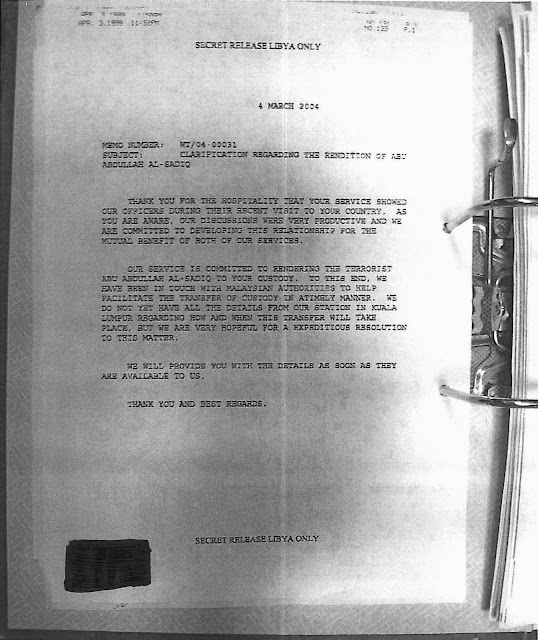 Copies of a number of the captured "Tripoli files" are posted here and here.  The documents were found by journalists and representatives from Human Rights Watch in Qaddafi's abandoned military intelligence headquarters in Tripoli in September.  According to a piece in the New York Times there were "at least three binders of English-language documents, one marked C.I.A. and the other two marked MI-6, among a larger stash of documents in Arabic." Human Rights Watch took pictures of approximately 300 of the "thousands" of documents, but left the originals in Libyan custody. For a first person account of finding the documents see Peter Bouckaert's "The Gaddafi Files" in Foreign Policy.

Captured documents relevant to Belhadj's suit in the U.K. reportedly include a letter dated March 18, 2004 from Sir Mark Allen, formerly the head of counterterrorism at MI6, to Moussa Koussa, the head of Libyan intelligence stating:


I congratulate you on the safe arrival of Abu Abdullah al-Sadiq [Belhadj]. This was the least we could do for you and Libya to demonstrate the remarkable relationship we have built over the years. I am so glad. I was grateful to you for helping the officer we sent out last week.

The Belhadj lawsuit joins another one against the U.K. government filed in October by Sami al-Saadi, which also relates to involvement by U.S. and U.K. authorities in his rendition and is also based, in part, on captured documents from Tripoli.
at 3:04 PM
Email ThisBlogThis!Share to TwitterShare to FacebookShare to Pinterest
Labels: CIA, Libya, seized documents, UK
Newer Post Older Post Home