WWII Captured German Documents: "we can 'lose' some if we wish" 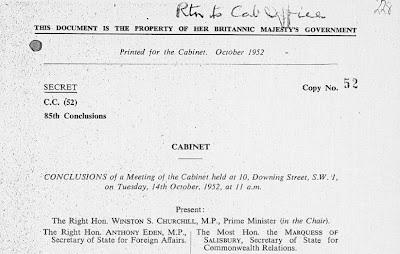 The U.K. National Archives are providing an increasing number of copies of its records online.  An interesting example that illustrates the importance of retaining notes of meetings (and not just final memoranda) for adequately documenting government activities and also demonstrates that concerns about the integrity of captured documents in foreign custody are not just conspiratorial is the record of a cabinet meeting discussion of captured German archives from October 1952.

The formal memorandum of the meeting notes that, while there was every intention to eventually return the diplomatic documents, the military documents "presented more difficulty, since there were security reasons for not returning some of these to the Germans" and that preliminary discussions were needed between the U.K., the U.S. and France to "determine what classes of documents should continue to be withheld from the Germans."  The memorandum notes:

Thanks to thoughtful records retention, what survives from the meeting is not just the formal memorandum, but also the notes that were taken at the meeting.  When the notes are consulted the discussion of the German archives appears to have had a different tenor and indeed some different content.  Attributed to Secretary State for Foreign Affairs Anthony Eden is a statement that the U.K. could copy the documents before they are returned to German and that "we can 'lose' some if we wish."  Moreover, in contrast to the formal memorandum that speaks of granting the Minister of Defence discretion to "withhold" documents, the notes of the meeting conclude that that the "M/D" [Minister of Defence] with "C.O.S."[Chiefs of Staff] will have "discretion to destroy."

I am posting here the full memorandum and the notes of the meeting, courtesy of the U.K. National Archives.
at 8:35 PM
Email ThisBlogThis!Share to TwitterShare to FacebookShare to Pinterest
Labels: access, Germany, return, seized documents
Newer Post Older Post Home