There is a judgment (hat tip Just Security) in the civil lawsuit against portions of the U.K. government brought by Abdul-Hakim Belhaj and his wife Fatima Boudchar relating to their detention, rendition, and mistreatment (previously discussed here).  In a lengthy opinion the High Court held "with hesitation" that the claims were barred by the act of state doctrine. The Court noted that its "hesitation" at its own conclusion arises from:


a residual concern that (on the basis of the Particulars of Claim) what appears to be a potentially well-founded claim that the UK authorities were directly implicated in the extra-ordinary rendition of the Claimants, will not be determined in any domestic court; and that Parliamentary oversight and criminal investigations are not adequate substitutes for access to, and a decision by, the Court.

And specifically in relation to the application of the act of state doctrine, the Court noted:


Although the act of state doctrine is well-established, its potential effect is to preclude the right to a remedy against the potential misuse of executive power and in respect of breaches of fundamental rights, and on a basis which defies precise definition. It is a doctrine with a long shadow but whose structure is uncertain.

Of particular interest to this blog is the High Court's discussion of the unique fact that certain allegations in the lawsuit are based on evidence from the "Tripoli files" found by journalists and members of Human Rights Watch in an abandoned military intelligence headquarters during the fall of the Qaddafi regime in 2011.  The documents (previously discussed here, here, and here) include C.I.A. and MI-6 documents related to the rendition of Belhaj (referred to in the documents as Abu Abdullah Al-Sadiq) and his wife, who was pregnant at the time.

While it is unclear whether the U.K. government defendants would have ultimately challenged the authenticity of the documents were the proceedings to have continued, the High Court notes at para. 4 the unique nature of the evidence:


Although many of the facts relied on by the Claimants are neither admitted nor denied by the Defendants, unusually, some appear to be supported by documents which have come into the Claimants' hands as a result of the change in political fortunes in Libya.

The High Court cites them repeatedly in its recitation of the "factual assertions forming the basis of the claim":


On 1 March 2004 the 3rd Defendant (MI6) sent a fax to the Libyan intelligence services informing them that the Claimants had been detained in Malaysia and identifying the place where they were held.

On 6 March 2004 the US authorities sent two further faxes to the Libyan authorities informing them that the Claimants were due to be placed on a commercial flight from Kuala Lumpur to Bangkok, that the abduction and rendition would take place in Bangkok and that they would be placed on a US aircraft for a flight to Libya.

A more detailed "Schedule for the Rendition of [the First Claimant] to the Libyan authorities" was faxed later that day: the Claimants would be abducted in Bangkok, flown to Diego Garcia (a British Indian Ocean Territory) for refuelling of the aircraft, and then on to Tripoli.

The "Schedule" the Hight Court referenced is pictured below. 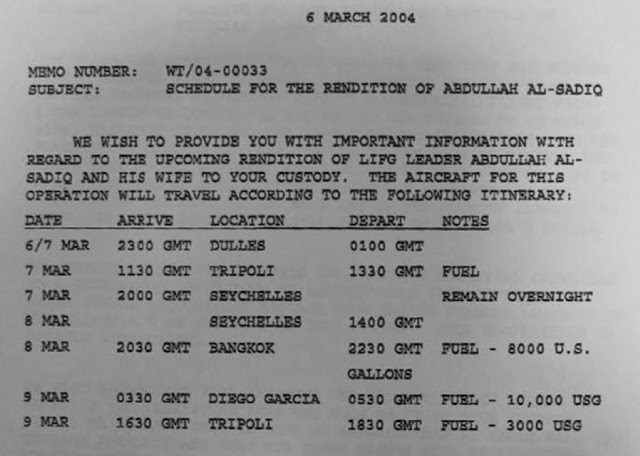 Despite the High Court's conclusion that the claims were barred, the lawsuit, along with the captured records, has nevertheless helped to document the rendition of the two individuals and the involvement of the U.S. and U.K. governments.
at 2:32 PM
Email ThisBlogThis!Share to TwitterShare to FacebookShare to Pinterest
Labels: access, CIA, Libya, seized documents, UK