The Destruction of the Desert Storm Documents

Based in part on records recently obtained via FOIA that have not been previously released publicly, this is a brief account of the fate of records captured from the Iraqi military during Operation Desert Storm in 1991. As described below, the originals were destroyed by the Defense Intelligence Agency (DIA) in 2002 due to mold contamination, while digital copies of a portion of the documents are at the Hoover Institution at Stanford, but are not currently open for research.

The documents captured by U.S. forces from the Iraqi military during Desert Storm have been variously, and inconsistently, measured as "12 million pages" (in a 1994 NARA technical review of U.S. Army operations), "approximately 4 million pages" or "400 boxes" (in a 2002 DIA memo) or "300 cubic feet" (in a 2002 NARA report).

As the latter report noted: "U.S. troops literally swept up these documents as they moved through Kuwait and Iraq, removing paper documents from every possible source, from buildings to the pockets of dead soldiers."  On the extent of the collection, NARA stated:

The collection also "includes records of the Gulf Cooperation Council," which, I earlier speculated, may be documents the Iraqis seized from the Kuwaiti government.

The digital conversion of the "12 million pages" was performed in Kuwait and Saudi Arabia with Kodak scanners and IBM computers.  They were scanned in TIFF4 format and stored on Digital Audio Tapes (DAT).  Translators "perused each document and annotated work sheets with keyword information, such as the date of capture, location where the document was found, and type of document."  An index database was also created that "formed the basis of a paper index" used to "access the records."

The DIA led the analysis and exploitation of the captured documents which resulted in "approximately 495 Intelligence Information Reports (IIRs) . . . while U.S. troops were deployed in Kuwait and Iraq."  After the war, military reservists "produced an unknown number of additional reports under DIA auspices." The importance of the captured documents for intelligence purposes predictably decreased over time and within several years after the war "both the paper records and digital images," which remained in DIA custody, "were largely unused."

Unfortunately, the decreasing intelligence value also appears to have influenced the plans for maintaining the digital collection. The 1994 NARA report noted under "Migration Plans" that "Due to the short term intelligence value of the DOCEX records, no need exists to migrate the image and/or index data." The long-term value of the digital collection and index for other purposes was apparently not considered, although it was foreseeable.  As a NARA archivist later noted:

These records are of the type which researchers will want to see when working on the Desert Shield/Desert Storm era. Similar records relating to Germany, Japan, Italy, Korea, and Vietnam are heavily used.

In fact, in the "late 1990s" the State Department contacted the DIA and "expressed interest in looking at some of the documents."  It appears this was part of a State Department push, following the Iraq Liberation Act of 1998 (which called upon the U.N. to establish an international criminal tribunal for Iraq) to build a case for war crimes and crimes against humanity against Saddam Hussein. In a September 2000 speech, the Ambassador-at-Large for War Crimes Issues in the Clinton Administration, David J. Scheffer, stated that the "primary objective" was to see Saddam and "the leadership of the Iraqi regime indicted and prosecuted by an international criminal tribunal." As part of that project Scheffer described the "archive of millions of pages of documents captured by U.S. forces in Kuwait and southern Iraq during Operation Desert Storm" and stated that the U.S. was "working to declassify these documents."

several DIA staff members were taken ill due to exposure to the records. The Department of Defense conducted a test of the records and determined that the paper documents were contaminated with "U.S. origin mold" that can cause conjunctivitis, rhinitis, bronchitis, skin, rash, asthma, and hypersensitivity pneumonitis in susceptible individuals.

As a NARA archivist later noted, "the presence of 'U.S. origin mold' does not say much for their maintenance under U.S. Control." A contractor was hired to scan the remaining images and placed all of them (the original 60% plus the re-scanned 40%) in TIFF6 format on 43 CD-ROMS.

Thereafter, the DIA submitted an SF-115 schedule, job number N1-373-02-03, in May 2002 to NARA and requested authority to destroy the contaminated original records.

After reviewing the situation, a NARA report recommended approval of the request noting

Notice of the request was published in the Federal Register in June 2002, although no one seemed to notice as no public requests for a copy of the schedule were received.

The SF-115 schedule was then approved by then-Archivist of the United States John W. Carlin in August 2002.  The Archivist's approval was significant as a confirmation, by both NARA and the DIA, that the original captured Iraqi records from Desert Storm were treated as both U.S. property and as U.S. federal records. Following the approval, the DIA destroyed the documents.

A separate proposed schedule, N1-373-02-01, was created for the digital copies.  An October 2004 email (redactions in this email are my own) from NARA to DIA addressed the status of this schedule.  NARA advised that finalizing the schedule for "these older records in electronic format should be a high priority" noting that "[e]lectronic records are more vulnerable to deletion or corruption when they are stagnant," a fact which the earlier history of these records had already graphically illustrated.  Somewhat disturbingly, the NARA appraiser also noted in the email the need to talk to the relevant DIA program office because the appraiser had only a single CD-ROM that "indicates that it is the 3rd cd in a collection. Where are the rest of them?"  I hope (and assume) that this part of the inquiry was resolved and a full, and uncorrupted, digital collection are safely in NARA or DIA custody (a FOIA request for the full schedule and additional related documents remains outstanding).

As for access to these documents, the 2002 NARA report notes that the complete 43 CD-ROM collection was classified at the Secret level. A 2002 memorandum from the DIA, however, noted that the DIA had both "classified and unclassified versions of these documents on compact discs."  Remarkably, the DIA stated in the same 2002 memorandum that it "will provide" to the National Archives "digitized versions of the documents" that "would be made available to anyone who wanted to see the documents." Approaching 10 years later this is still untrue.

A portion of the documents, however, have been in private hands since 2000. In his September 2000 speech mentioned above, David J. Scheffer stated that the U.S. had given a first set of declassified documents from this "archive" to "the Iraq Foundation" in August 2000 and that the U.S. was giving "several hundred more to the Iraq Foundation." The Iraq Foundation included the Iraq Research and Documentation Project (IRDP) founded by Kanan Makiya at the Center of Middle East Studies at Harvard and the documents provided by the U.S. government became the IRDP's "Kuwait Dataset."  Neither the IRDP, nor its website at Harvard, are active any longer, but, courtesy of the Internet Archive, this is a screen shot of the entry portal to the "Kuwait Dataset" from 2001: 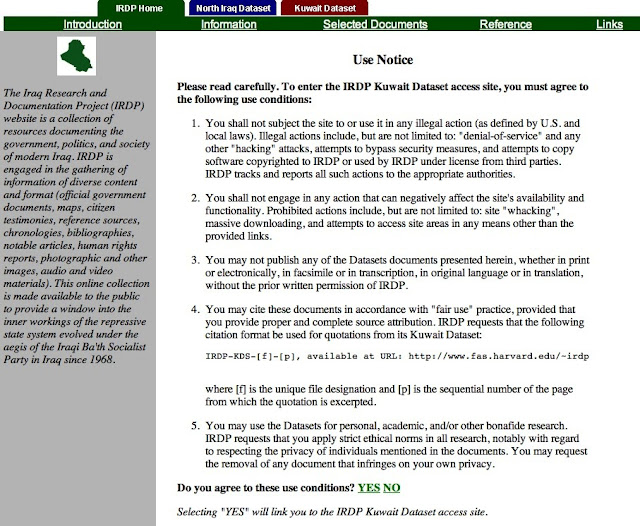 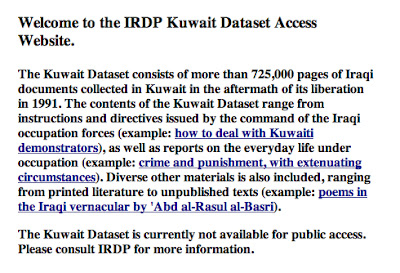 The Iraq Memory Foundation (IMF), which grew out of the IRDP, continues to control the "Kuwait Dataset (KDS)" that the U.S. government provided.  The IMF's current website describes the Kuwait Dataset similarly as:

800,000 pages; digitized, annotated, restrictively accessible -- primary geographical span: Iraqi-occupied Kuwait; primary chronological span: 1990-91. Gathered by the Coalition forces upon the retreat of the Iraqi military from Kuwait, KDS provides in harrowing detail a view of the treatment of the civilian population as well as the conduct of war. KDS is particularly rich in content underlining the human condition of both Kuwaiti civilians and Iraqi soldiers entrapped in Saddam's war.

Currently, the IMF's Kuwait Dataset is at the Hoover Institution at Stanford University (but should not be confused with the separate collection of Ba'ath Party documents obtained by the IMF in 2003 that are also at Hoover). The relevant Hoover collection guide is available here. It notes that the Kuwait Dataset consists of "725,000 pages 72 ppi black and white TIFF files."  While the Kuwait Dataset is only a portion of the approximately 4 million (or 12 million) pages originally seized, it is a significant portion.  While it currently remains closed to researchers, Hoover states that they hope to make the Kuwait dataset available for research in coming years.

The full NARA dossier on the original captured Iraqi documents from Desert Storm is available here. Thanks to Jay Olin and the FOIA team at NARA, who operate, in my view, the most professional FOIA office in our government.
at 10:40 AM
Email ThisBlogThis!Share to TwitterShare to FacebookShare to Pinterest
Labels: access, armed conflict, DIA, Hoover, IMF, intelligence, Iraq, Kuwait, Saddam, seized documents, State
Newer Post Older Post Home