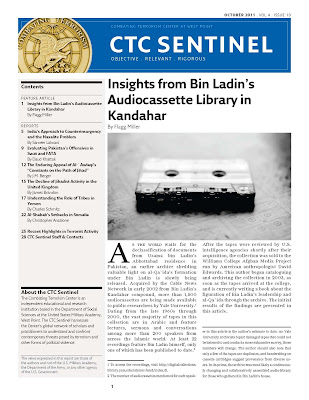 The cover story from October's CTC Sentinel from the Combatting Terrorism Center at West Point is "Insights from Bin Ladin's Audiocassette Library in Kandahar" by Flagg Miller. The article notes that more than 1,500 tapes were "acquired" by CNN "in early 2002 from Bin Ladin's Kandahar compound" and that after "the tapes were reviewed by U.S. intelligence agencies shortly after their acquisition, the collection was sold to the Williams College Afghan Media Project run by American anthropologist David Edwards."  The tapes were later transferred to Yale which began making them publicly available online as "Islamic Fundamentalist Audiotapes."  For "provenance" of the tapes Yale states, "The materials were a gift of David B. Edwards" and for copyright states "Copyright status for collection materials is unknown."  Yale's own description for the collection states:


Originally said to have originated in Osama bin Laden's compound in Kandahar, Afghanistan, these tapes endured a long journey to the United States and to their final home in Yale University. In the weeks following the Taliban's evacuation from Kandahar on December 7, 2001, the audiocassettes were initially acquired by a CNN producer and his Afghani translator. After the FBI declined stewardship of the tapes, CNN transferred the materials to Williams College's Afghan Media Project, headed by anthropologist David Edwards. After several years of work with the tapes, Edwards determined that Williams did not have the resources to preserve them. Yale was approached because of its well-known collections, scholarship, and database development related to Middle East studies. The tapes, many of which are in fragile and deteriorating condition, arrived in September 2006 and are housed at the Library Shelving Facility. Physical ownership of the tapes resides with Yale.