The U.S. government has now filed a new Statement of Interest (here) in the Chabad v. Russian Federation case, which involves a dispute over the return of the historical Jewish library and archive (the so-called Schneerson collection) that remain in Russia.  The U.S. government opposes Chabad's recent motion for entry of "interim judgment" in the amount of $14.75 million against the Russian Federation that reflected, the $50,000 per day sanctions for Russia's failure to transfer custody of the library and archive to Chabad.

The new U.S. Statement of Interest begins by recycling the same argument the United States previously made -- and the court previously rejected -- that the Foreign Sovereign Immunities Act does not allow the sanctions the court is imposing.  The United States also recycles its earlier arguments that, even if the law allowed such sanctions, to impose them would be counterproductive to the the return of the property and would cause "harm to the United States' foreign policy interests."  Judge Lamberth previously rejected these arguments as well and it is hard to imagine he would suddenly find them persuasive now.

The one request of the U.S. government that Judge Lamberth is likely to grant is that, if the court grant's Chabad's motion, the U.S. wants Chabad "to provide the Court and the United States with advance notice of any efforts to take additional steps to enforce the Court's interim judgment" in order to "permit the United States to make a timely, considered determination as to what steps it might need to take to protect its interests." Elsewhere the United States alternatively phrases this as "the United States would consider taking appropriate action to seek to prevent or mitigate" the purported harm to its foreign policy interests.  What such "appropriate action" the U.S. government has in mind is unclear, but perhaps we may see in the future.

The final noteworthy part of the government's Statement of Interest its Exhibit A, which consists of a letter from Mary E. McLeod, the Principal Deputy Legal Adviser at the State Department. It primarily urges that the Department of Justice file a Statement of Interest, but also notes past and ongoing diplomatic efforts to resolve the dispute.  Of particular interest, it discloses that the U.S. State Department has proposed to the Russian Federation "a partial resolution through a state-to-state archival exchange agreement."  Whether that proposal simply involves the return of the library and archive at issue in the Chabad case pursuant to this agreement or whether the agreement actually involves the U.S. sending some unknown archives to the Russian Federation in "exchange" raises some interesting questions.  The letter also notes the corresponding lawsuit (for recent update see here) that the Russian Ministry of Cultural and the Russian State Library filed in Moscow last year against the United States and the U.S. Library of Congress in relation to seven books that are part of the Chabad collection that Russia had loaned to the Library of Congress during the 1990s.

Lastly, for an interesting account of what it is like to visit the collection in Moscow, see this recent piece by Paul Berger. 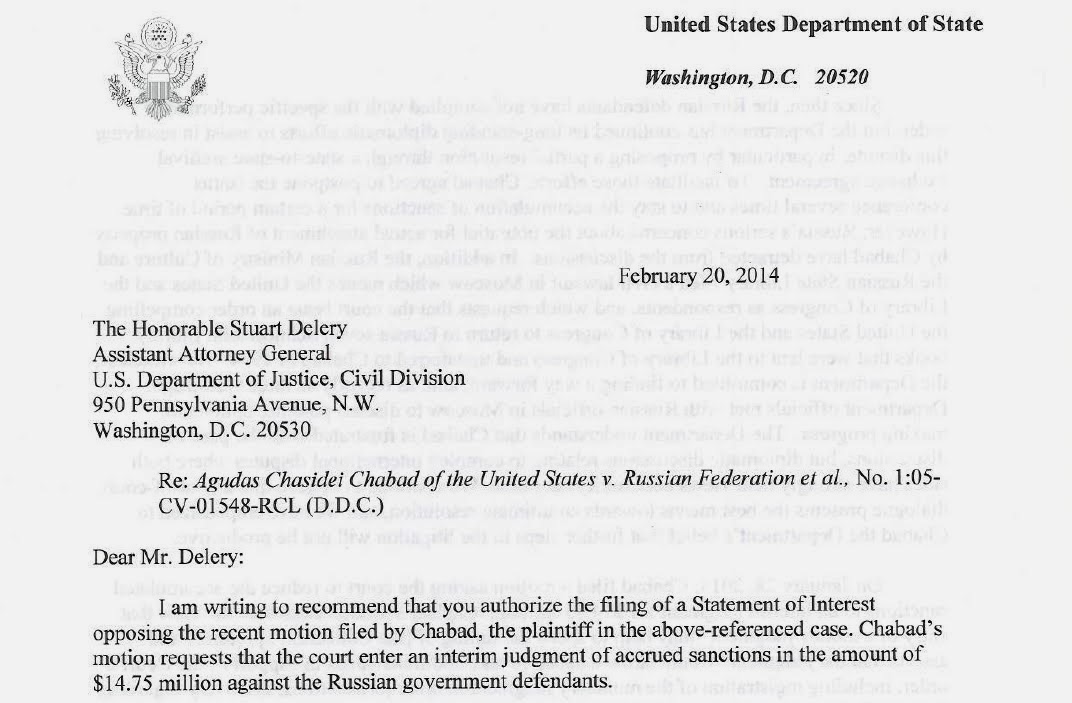