Last night the Senate passed by unanimous consent Senate Resolution 333 (available here), which "strongly urges" the State Department to "renegotiate" with Iraq "in order to ensure that the Iraqi Jewish Archive be kept in a place where its long-term preservation and care can be guaranteed."  Led by Sen. Pat Toomey, the Resolution had 30 co-sponsors from both parties. 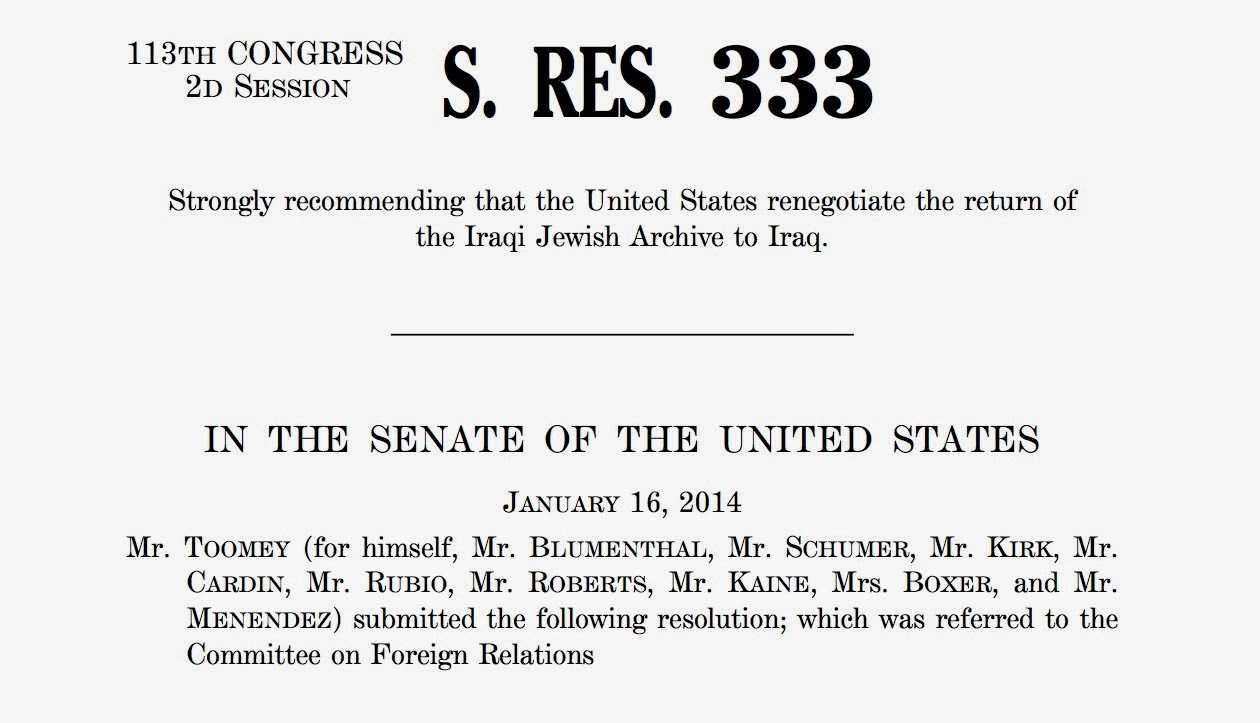 First, the Resolution has a balanced tone which is conducive to the type of re-negotiation it urges.  It gives credit to Iraq, for example, for "acknowled[ing] the importance of the Archive" and demonstrating "a shared respect for the wishes of the Iraqi Jewish diaspora" based on its agreement to, and attendance at, the burial of several Torah fragments from the Archive in a New York cemetery in December 2013 (Iraqi Embassy press release on that event is here, AP coverage here).  The Resolution also both "reaffirms the United States commitment to cultural property under international law," which I would read as a show of respect for the position of Iraq, while it also "reaffirms the United States commitment to ensuring justice for victims of ethnic and religious persecution."

Second, the Resolution puts forward what appear to be reasonable and modest goals.  After a series of "whereas" phrases that put the status and fate of the Iraqi Jewish Archive in historical context, the substance of the Resolution is to urge (1) that the State Department negotiate with Iraq "in order to ensure that the Iraqi Jewish Archive be kept in a place where its long-term preservation and care can be guaranteed" and (2) that "the Iraqi Jewish Archive should be housed in a location that is accessible to scholars and to Iraqi Jews and their descendents who have a personal interest in it."  Of course, Iraq would respond that negotiation is not even necessary to accomplish goal (1), which Iraq has stated it shares.  Goal (2) is a bit more complex, however, especially given that (as the burial of the Torah fragments illustrated) special religious importance attaches to some of the physical originals that can not be replicated through digital copies and the fact, stated elsewhere in the Resolution, that the "Iraqi Jewish community" is "now represented by the diaspora outside Iraq."

Finally, the Resolution provides a compelling justification for new negotiations noting that the agreement between the National Archives and Records Administration (NARA) and the Coalition Provisional Authority (CPA) from August 2003 (available here) was signed "under great urgency and before adequate time could be dedicated to researching the history of the Iraqi Jewish Archive" and, again later in the Resolution, that that the agreement was "signed before knowing the complete history of the Iraqi Jewish Archive."  This is clearly correct.  As I mentioned in an earlier post, for example, when the State Department published a Notice in the Federal Register in August 2003 designed to protect the Iraqi Jewish Archive under the Immunity from Seizure Act it strains credulity that the State Department enforced even its own standards that purport to require a "professional inquiry" using "independent, multi-source research" into the provenance of foreign cultural property coming into the U.S. and a certification that there is no "reason to know"of any "potential for competing claims of ownership." The complexity of the legal status of the Archive was simply not considered adequately and fully in the rush -- both understandable and praiseworthy -- to protect them.

More broadly, the larger issue is the nature of the "agreement" that the Resolution urges the State Department to "re-negotiate," which raises unresolved questions.  A recent news piece on the controversy over the Archive, for example, includes quotes from U.S. Rep. Jerrold Nadler asserting that the NARA-CPA agreement was essentially between two U.S. entities and asking "Why should we negotiate with the government of Iraq at all? . . . I don't see that they have any business in this" and the Iraqi Ambassador to the U.S., Lukman Faily, responding that "this was an agreement, a legal agreement, agreed with the [CPA] back in 2003 and it's owned by the Iraqi government," both of which are overstatements.

Contrary to Rep. Nadler's assertions, there is, of course, a second letter "agreement" directly between the Iraqi Ministry of Culture of and the CPA in which Iraq agreed to the removal of the archive "on the condition that" the "documents are returned to Iraq."  Moreover, Nadler's characterizations of the CPA, which was acting as occupying power in Iraq, are not necessarily consistent with the U.S. government's inconsistent, and never fully resolved, assertions regarding the precise legal status of the CPA.  See, for example, the Congressional Research Service's report, The Coalition Provisional Authority (CPA): Origin, Characteristics, and Institutional Authorities from 2005 which notes that U.S. government assertions about the CPA make unclear even basic facts such as whether the CPA was created by the President, CENTCOM, or a U.N. Security Council resolution.  And in any event, the CPA-NARA agreement also directly involves Iraq given that the CPA formally appointed the Iraqi Ministry of Culture its designee under the terms of the agreement (2004 Letter of Designation here).

On the other hand, neither of these "agreements" is a formal U.S. treaty and neither may constitute an "international agreement" or executive agreement under U.S. law.  I would be happy to be corrected, but I have not seen any indication that either agreement was reported to Congress pursuant to the Case Act, for example.  Regardless of the extent to which it is a "legal" agreement, however, it still would be enough to constitute a "political" commitment that the U.S. cannot simply disregard.

According to an anonymous State Department official, it appears that the State Department has already begun discussions with Iraq in order to find "a creative approach to access and sharing of these documents and materials."  While concern for diplomatic appearances may prevent either side from characterizing such discussions as a "re-negotiation" -- even if accurate -- hopefully an acceptable solution can be found in line with the goals identified in S. Res. 333 that successfully navigates all of the competing interests.
at 5:33 PM
Email ThisBlogThis!Share to TwitterShare to FacebookShare to Pinterest
Labels: access, Iraq, Jewish archives, preservation, Saddam