Chabad Moves for $14.75 Million Judgment Against Russia over Jewish Archives

In a new development in the Chabad v. Russian Federation case over the return of the historical Jewish library and archive that remains in Russia (previously coverage here, here, and here), Chabad has filed a motion for an entry of "interim judgment" in the amount of $14,750,000 against the Russian Federation.  The figure reflects the $50,000 per day sanctions that have accrued from January 2013 to January 2014 for Russia's failure to transfer custody of the library and archive as the court ordered in 2010.

The motion states that Russia has "demonstrated a consistent lack of interest in resolving this matter in contemptuous disregard of this Court's jurisdiction and rulings and in flagrant disregard of well-established international law prohibiting the plunder and looting of cultural and religious objects in time of war and upheaval."

Moreover, the motion notes that in December 2013:


Russian President Vladimir Putin personally decided to take matters into his own hands by announcing the placement of a small portion of the Library within a special department of the Russian State Library at the Jewish Museum and Tolerance Center in Moscow -- rather than, as this Court directed, returning the entire Library and Archives to Chabad's duly authorized representative.

The motion ends by arguing:


While money cannot remedy the continued theft of Chabad's sacred religious texts, a clear sign from this Court regarding the significance of this litigation and the consequences of Russia's ongoing disregard of the Court's orders may help to speed the timing of their return. 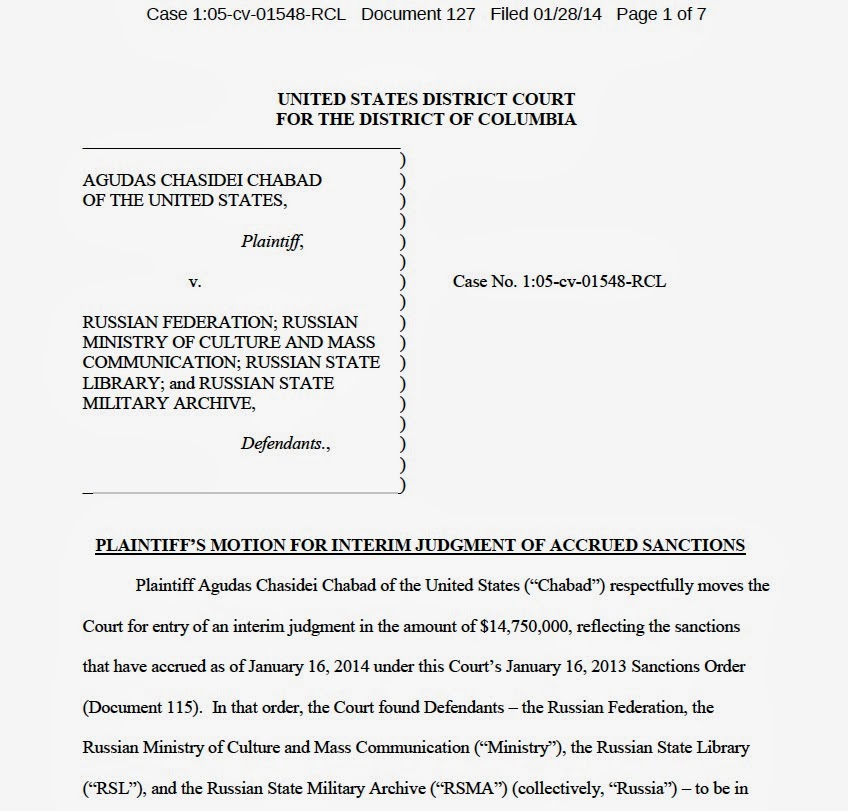 at 12:15 PM
Email ThisBlogThis!Share to TwitterShare to FacebookShare to Pinterest