WashPo on Sensitive Diplomatic Docs Left Behind in Libya

Michael Birnbaum has a piece in the Washington Post called "Sensitive documents left behind at U.S. diplomatic post in Libya" (available here). It begins:


More than three weeks after attacks in this city killed the U.S. ambassador to Libya and three other Americans, sensitive documents remained only loosely secured in the wreckage of the U.S. mission on Wednesday, offering visitors easy access to delicate information about American operations in Libya.

Documents detailing weapons collection efforts, emergency evacuation protocols, the full internal itinerary of Ambassador J. Christopher Stevens’s trip and the personnel records of Libyans who were contracted to secure the mission were among the items scattered across the floors of the looted compound when a Washington Post reporter and an interpreter visited Wednesday.

The article also provides images of several of the documents here. Among them is an evacuation plan which lists as a task "Gather or destroy sensitive equipment and documents." 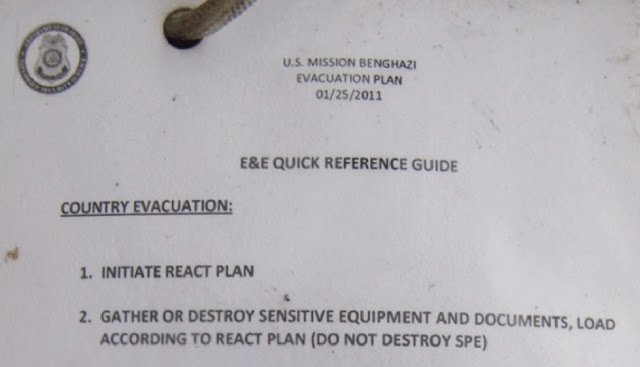