Somewhat belatedly I wanted to briefly update the issue of possible contempt sanctions in the Chabad v. Russian Federation case involving the Russian Federation's failure to comply with a court order to hand over a historical Jewish archive and library (background is here).

In the most recent filing in the case (available here), Chabad responded to, and rejected, the U.S. government's legal arguments.  Chabad summarizes its arguments quite clearly as follows:


The United States’ Statement of Interest is erroneous and defective for several reasons:

First, rather than addressing the specific inquiry made by the Court at this juncture in this extended proceeding – i.e., whether any serious impact to American foreign-policy interests would result from the imposition of contempt sanctions that this Court has already held to be justified – the Statement of Interest challenges the legal holding that the Court made in July 2011, after the United States had filed a Statement of Interest that did not object to the imposition of sanctions. Contrary to what it acknowledged in the Statement filed in June 2011, the United States now argues that a contempt sanction in this case “would be inconsistent with the Foreign Sovereign Immunities Act.” This Court squarely held to the contrary in July 2011, and it has not requested the United States to revisit that legal issue.

Second, in making this new legal argument, the United States invokes a legal principle that has no application to this case. The United States asserts that the Foreign Sovereign Immunities Act does not permit execution of a judgment against “tangible property possessed by Russia in Russian territory.” Chabad is not seeking to execute its judgment against property in Russia. It is seeking to enforce a court order pursuant to 28 U.S.C. §§ 1610(a)(3), (b)(2) and with a contempt sanction that would be executed entirely within the United States.

Third, in a vain effort to distinguish this case from the ruling of the Court of Appeals in FG Hemisphere Associates, LLC v. Democratic Republic of Congo, 637 F.3d 373, 377 (D.C. Cir. 2011), the United States contends that the Court of Appeals’ decision in the Republic of Congo case concerned “non-compliance with a discovery order.” Statement, p. 9. The United States has apparently overlooked the fact that the defendants’ pattern of contempt in this case began with false interrogatory responses and ended with a refusal on June 26, 2009, to “respond to plaintiff’s discovery requests”, followed by a withdrawal of the case after noting that defendants would not recognize any orders of the Court. 729 F. Supp. 2d at 144. (ECF 71, 92-1.) Hence this case also concerns “non-compliance with a discovery order.”

Fourth, the United States’ Statement totally fails to specify any serious impact to American foreign-policy interests that would result from the entry of a civil contempt order in this case. The Statement invokes only a general concern regarding reciprocity and retaliation, and that concern rests on a misstatement of the relief that Chabad is seeking in this case. It also asserts – contrary to ample historical evidence – that entry of a contempt order will hinder “amicable resolution of the dispute between Chabad and Russia concerning the Collection.” Statement, p. 13. History has proved that many years of diplomatic effort at the highest levels of the United States and Russian governments failed to reach such an “amicable resolution.” And the Department of State has been singularly passive and unsuccessful in convincing the Russian Federation to comply with this Court’s judgment and international law.

We will await any further action on docket. 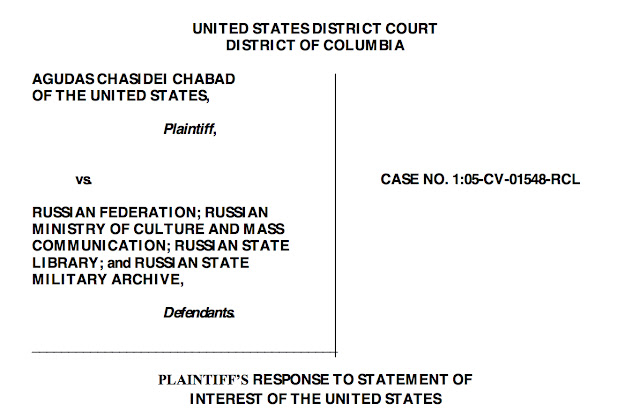