The usage of captured or seized documents in the ongoing Guantanamo Bay detention cases raises a number of meaty issues.  For this post I want to briefly highlight issues of classification and redaction.

Current U.S. doctrine provides that as"a general rule, captured and acquired documents and media are considered unclassified" and that while "[c]apturing units may classify document and media to protect sources and methods or on-going operations, . . . such classification should be kept to the lowest level possible and with minimal use of caveats." Given this, in reviewing recent public filings by the government in Guantanamo habeas cases that include captured or seized documents, it is striking how the same document can be treated in often very different ways from one case to the next.

As one example, compare two versions of AFGP-2002-600875 (here and here) filed in two cases one month apart.  In one, the document was classified SECRET//NOFORN (crossed out at the top) and in the other it was FOUO//LES.  More conspicuous of course is that what is completely blacked out in one version is completely unredacted in the other: 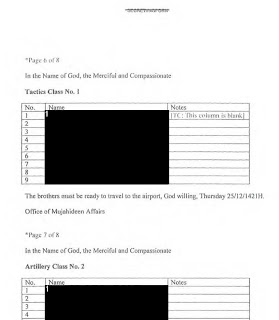 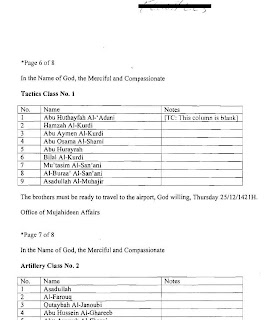 Contextual information about the captured documents can sometimes be found in Intelligence Information Reports (IIRs) in the same filings.  So, for example, in IIR 7 739 7062 03 you learn that the government interprets the document above as "lists of over 150 Al-Qaeda members scheduled for tactics, artillery, security, snipers, and anti-aircraft training dated March 2001 by the Office of Mujahideen Affairs" and that the document was "recovered by U.S. Coalition forces from an Al-Qaeda house in Kandahar//GeoCoords:3135/06545E//, Afghanistan (NFI)." The IIRs also illustrate similar redaction inconsistencies: in the case of this IIR, for example, a later filed version of the same IIR actually contains, in at least one place, more redactions:

There are plausible explanations for some of these situations, including, for example, the possibility that a document's classification status could have changed between filings. Nevertheless, such examples raise legitimate questions about the procedures being used to classify and redact these captured records. The lack of consistency seems particularly odd for documents that are presumably contained within, and obtained from, the same centralized Harmony captured document repository.

For another issue related to captured documents in the Guantanamo cases (in particular the reliability of government records documenting what property and documents were in the possession of individuals upon their capture) see Emptywheel's recent post on the Latif case.
at 12:22 AM
Email ThisBlogThis!Share to TwitterShare to FacebookShare to Pinterest
Labels: gtmo, seized documents
Newer Post Older Post Home