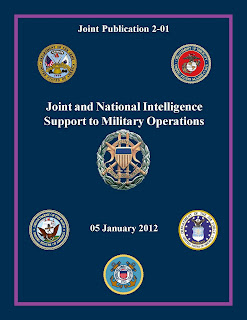 Steven Aftergood at Secrecy News had a recent post highlighting the new Joint Publication 2-01 "Joint and National Intelligence Support to Military Operations" published on January 5, 2012 (available from the Federation of American Scientists here and also on DTIC here).

The document was "prepared under the direction of the Chairman of the Joint Chiefs of Staff" and "provides doctrine for joint and national intelligence products, services, and support  to joint military operations."

Document and Media Exploitation is mentioned in several places and Appendix C is devoted exclusively to the topic. While portions are annoyingly written in the military's acronym-heavy style ("The JDEC may be under the OPCON of the CCDR or in direct support of the CCDR and under the staff supervision of the CCMD J-2"), it is definitely worth reading. Aftergood notes in particular the introduction of the term BEI for "biometric-enabled intelligence." This also shows up in the appendix on Document and Media Exploitation, which notes:


The forensic and biometric exploitation of captured or acquired documents and media may also result in the development of FEI and/or BEI data and products to support urgent information needs and operational planning.

To see the forensic exploitation of a captured document take a look at this report from an FBI lab that tests a number of seized documents for fingerprints.

A few other passages from the Joint Publication (all emphasis mine):

As a general rule, captured and acquired documents and media are considered unclassified unless they originated in the US and/or an allied nation and are marked as classified. Capturing units may classify document and media to protect sources and methods or on-going operations, however, such classification should be kept to the lowest level possible and with minimal use of caveats. Documents that bear foreign classification markings are handled according to US classification standards, regardless of their original foreign classification.

Original documents should never be altered, marked upon, or separated from the batch to which they belong. . . . When at all possible, DOMEX facilities should be fire-protected, have humidity and temperature control systems . . . . Once exploitation is complete, documents should be moved to a storage facility for long-term storage, returned to the capturing unite, or disposed of as directed by the supported command. Documents designated for destruction should be handled in the same manner prescribed for US classified documents to preclude compromise of US and multinational interests.