The Yanukovych Letter: Is Russia in Ukraine Really Becoming the U.S. in Panama?

Yesterday at the U.N. Security Council the Russian Federation opened a new front in the debate over international legal analysis of Russian forces in Ukraine by brandishing a letter purportedly from ousted President Viktor Yanukovych to Russian President Vladimir Putin asking for Russian forces to enter Ukraine "to establish legitimacy, peace, law and order, stability and defending the people of Ukraine."

Russia’s UN envoy shows #Yanukovich’s letter in which he asks Putin for use of Russian military force in Ukraine pic.twitter.com/DPgDZqtlU4
— RT (@RT_com) March 3, 2014

Putin picked up the issue in his own comments this morning stating "As you know, the legitimate president, Yanukovych, requested Russia to use military force to defend the lives and health of Ukrainians."

The Yanukovych letter and Putin's assertion places the issue of consent under international law front and center. Ashley Deeks at Lawfare had earlier found it puzzling that Russia had not "claimed that it has the consent of ousted Ukrainian President Yanukovych to introduce troops" noting that there "is at least a colorable argument that Yanukovych remains the head of the Ukrainian state."  Russia perhaps found Ashley's thoughts quite persuasive.

While commentary over the Ukraine controversy is full of off-hand comparisons to previous U.S. invasions in arguing that the U.S. position is hypocritical, the new letter and the consent argument invite a new, serious, and very legitimate comparison to the U.S. intervention in Panama in 1989.  Others -- including the Russian representative at the U.N. Security Council yesterday -- have pointed to the comparable U.S. justification for Panamanian intervention based on an asserted need to protect U.S. citizens and U.S. military bases in Panama, but a more important, and even closer, comparison is the argument of consent.

Consent was a central U.S. justification for intervention in Panama that was just as, if not more, thin than the paper on which Yanukovych's invitation to Putin is written. The U.S. position was that it had never recognized the Noriega regime as the legitimate government in Panama and, just before Operation Just Cause began, the U.S. government purported to swear into office -- on a U.S. military base -- Guillermo Endara as the President of Panama, who then invited U.S. forces into his country.  As the U.S. Army's Law of War Manual later described "concurrent with the invasion, Mr. Endara was sworn in as President of Panama in the U.S. Southern Command Headquarters one hour before the invasion occurred; forces were already airborne en route" (see p.82).

The U.S. therefore relied upon consent provided by a "President" who had no government and had no command and control over any military or police forces in his country, not unlike Yanukovych while drafting his letter to Putin.  The U.S. justified recognizing Endara on the basis that he had won an election in Panama months earlier that had been nullified by Noriega, but Putin has an equally colorable argument that Yanukovych remains the legitimate leader of Ukraine despite his forced removal.

I note that over at Opinio Juris, Chris Borgen and reader "Non liquet" have been discussing the Yanukovych letter as a "legal fig leaf."  I agree, but also believe that the U.S. consent argument in Panama was just as, if not more, indecently revealing.  The consent argument was so central to the U.S. intervention in Panama, in fact, that it fundamentally altered the U.S. view of the application of the law of armed conflict in finding that Panama was not an Article 2 international armed conflict.  The always-definitive W. Hays Parks opined on the issue (excerpted at p. 242, the U.S. Army unfortunately no longer has a copy of the actual memorandum, by the way. If anyone happens to have one, I'd be grateful for a copy):

Borgen's post over at Opinio Juris argues that for "about 40 years" the U.S. has "moved away from focusing on the recognition of governments" (citing the Restatement (Third) of Foreign Relations Law) and concludes by stating that he would be surprised if the Yanukovich letter would be "persuasive of the legality" of Russian intervention, but that Russia "seems to be about fig leaves, not judges' robes."  The Panama precedent is also instructive on these two points. First, District Judge William Hoeveler subsequently rejected the U.S. position, holding that the U.S. intervention in Panama was "clearly an 'armed conflict' within the meaning of Article 2" of the Geneva Conventions and that Noriega was properly a prisoner-of-war under the Geneva Conventions.  U.S. v. Noriega, 808 F. Supp. 791, 795 (S.D. Fla. 1992).  Second, if the U.S. has been moving away from a focus on "recognition," as Borgen states, it certainly didn't show in this 2002 DOJ OLC Memo wherein the OLC reasserted:


The United States' intervention in Panama on December 20, 1989 came at the request and invitation of Panama's legitimately elected President, Guillermo Endara. The United States had never recognized General Manuel Noriega, the commander of the Panamanian Defense Force, as Panama's legitimate ruler. Thus, is the view of the executive branch, the conflict was between the Government of Panama assisted by the United States on the one side and insurgent forces loyal to General Noriega on the other side. It was not an international armed conflict between the United States and Panama, another State. Accordingly it was not, in the executive's judgment, an international armed conflict governed by common article 2 of the Geneva Conventions. (footnotes omitted).

The DOJ OLC also repudiated Judge Hoeveler's holding to the contrary "to the extent that the holding assumed that the courts are free to determine whether a conflict is between the United States and another 'State' regardless of the President's view whether the other party is a 'State' or not" (Hoeveler did not assume that, by the way, but that's another story) and the OLC alleged that Hoeveler "impermissibly usurped the recognition power, a constitutional authority reserved to the President."

Also interesting is that in the Panama intervention, the U.S. also relied, in part, on the fact that the Noriega regime had purportedly "declared war" on the U.S. This is much like if Russia would now rely upon the new Ukrainian government's recent public statements of "war" with Russia.  "But," I hear someone protest, "the Ukrainian government's statements were only after Russia had violated Ukrainian sovereignty."  The same was true with Panama in 1989.  Noriega had complained for months to the U.N. of the "movement of armed units of the United States army outside their defence sites, violation of its airspace, infiltration by United States intelligence units" and the arrival of a U.S. "offensive military team that had never before been part of the forces used to defend the Panama Canal" all of which were prior to the Panamanian "declaration of war" (and the election of Endara).

This helpful U.N. recap of the U.N. Security Council debate over U.S. intervention in Panama mirrors quite closely what we have watched the past few days in the same Council with just the names changed.  The U.S.S.R. and others asserted that the U.S. was in clear violation of international law.  The U.S. retorted that it had the "approval" of "the democratically elected leaders of Panama" and was protecting U.S. citizens.  Because of the veto power, nothing came out of the Security Council, but the U.N. General Assembly later approved this Resolution "deplor[ing] the intervention in Panama by the armed forces of the United States of America, which constitutes a flagrant violation of international law and of the independence, sovereignty and territorial integrity of States." Read the resolution and replace "United States" with "Russia" and "Panama" with "Ukraine."

There are, of course, arguments that could arguably distinguish Panama from Ukraine that I will leave others to identify. I think in both cases, Eric Posner's succinct two-point analysis on Ukraine is on point:  "1. Russia's military intervention in Ukraine violates international law" (as the U.N. General Assembly found the U.S. intervention in Panama did) and "2. No one is going to do anything about it." (As no one did with Panama in 1989).

For more on the legal analysis of U.S. operations in Panama, particularly in the context of how the nature of the conflict may affect the legal status of Panamanian government records seized by U.S. forces (which remain to this day in U.S. military custody), see my recent article "The Lost Archives of Noriega" (with apologies for the self-promotion). 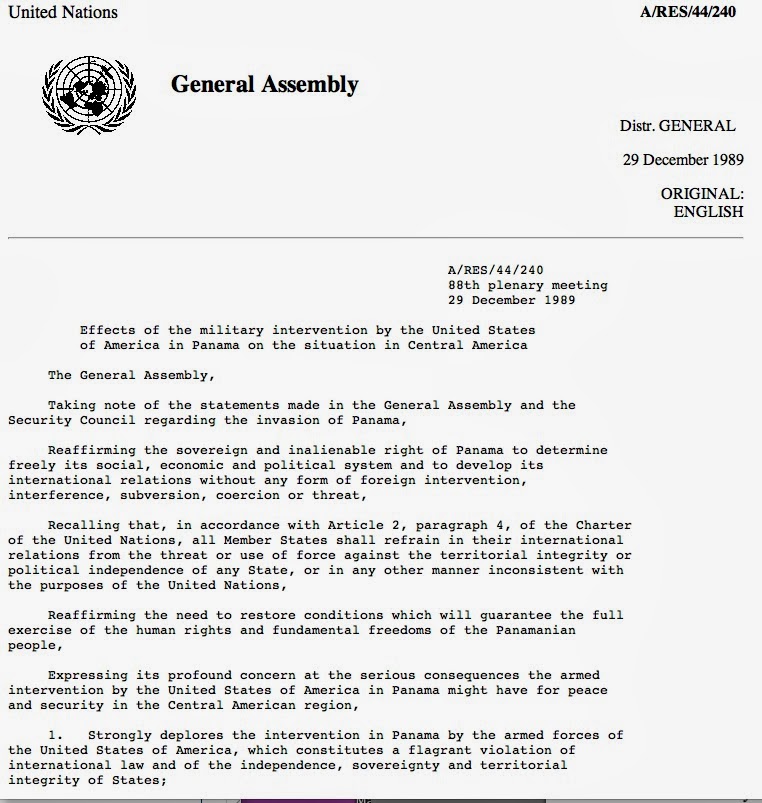