More CIA Records on Noam Chomsky the CIA Could Not Find

It turns out that there are even more CIA records on Noam Chomsky including memoranda indicating that the CIA was documenting Chomsky's activities specifically as part of the CIA's  CHAOS/MHCHAOS espionage program. Take a look, for example, at this: 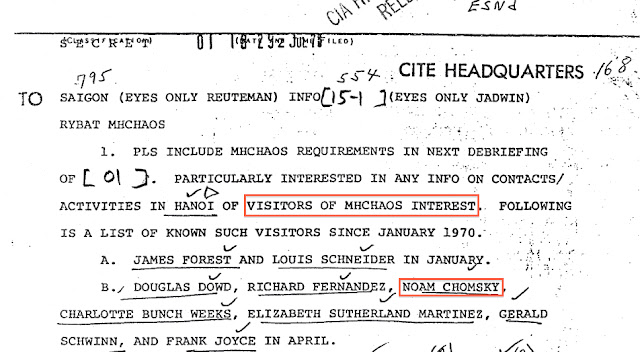 You'll recall a couple of months ago John Hudson at Foreign Policy reported that the CIA was forced to admit that it had kept at least one record on Noam Chomsky, "Exclusive: After Multiple Denials, CIA Admits to Snooping on Noam Chomsky" which was based on this single CIA document recently obtained via a FOIA request by Kel McClanahan at National Security Counselors to the FBI on behalf of Chomsky biographer Fredric Maxwell, after the CIA had repeatedly denied possessing any such records.

Additional CIA records on Chomsky can be found in a collection of documents the CIA provided to the House Select Committee on Assassinations (HSCA) which was established in 1976 to investigate the assassinations of JFK and MLK. The collection is known as the "Segregated Collection" of CIA documents provided to the HSCA and its contents began to be cleared in the 1990s following the JFK Assassination Records Collection Act of 1992.  The awesome Mary Ferrell Foundation has a database consisting of these records that is full-text searchable and in which is found a number of CIA records further evidencing CIA documentation on Chomsky:

(1) The first record is a CIA list from October 1967 listing Chomsky (twice, one crossed out) in an alphabetical list.

According to the Church Committee report on the CHAOS program (p. 691), the CIA "intensified" its inquiry into "American dissidents" specifically in October 1967 contemporaneous with the October 1967 peace demonstrations at the Pentagon and in connection with the CIA producing a study on "International Connections of the U.S. Peace Groups" in November 1967.  The list appears to document a CIA search for information about the named individuals.  Note at the top it states in type and handwriting "NPII in RID But Listed By [CIS] in VN Protest [Run]"

My working theory is that this means the CIA was running the names against its records.  For Chomsky and the others on this list the result was "NPII in RID" which likely means they found NPII "No Pertinent Indentifiable Information" in the "RID" system (as in the "RID" name check in this unrelated CIA record).  But according to the handwritten note Chomsky and others may have been found in records of "CIS" [either CIA Counterintelligence Staff or CIA Current Interest Staff?] relating to Vietnam Protests.  This record could then potentially mark the beginning of CIA CHAOS/MHCHAOS documentation of Chomsky.

(2) The second record is the one pictured at the beginning of this post, a CIA memorandum dated July 1, 1970 requesting information on "contacts/activities in Hanoi of visitors of MHCHAOS interest" and including Noam Chomsky in a "list of known such visitors."  This record was made about a month after the record released via FOIA to the National Security Counselors (that noted Chomsky's "endorsement" of others traveling to North Vietnam). Note also the cryptonym notation "RYBAT" used with MHCHAOS.  RYBAT according to this helpful index, also from the Mary Ferrell Foundation, apparently indicated "extreme sensitivity."  In a different copy of this same document, ironically cleared by the CIA a year later, all the names, including Chomsky's, are redacted.

(3) The third record is a CIA report dated December 15, 1970 listing Noam Chomsky among "foreign invitees" to a "National Anti-War Conference" scheduled for Sydney, Australia in February 1971.

This document also is also marked with RYBAT and MHCHAOS.

an earlier version redacted these notations:

(4) The fourth record is a CIA memorandum dated Dec. 29, 1970 again listing Chomsky as a "foreign invitee" to the Anti-War Conference in Sydney.  In relation to Chomsky, it also references an additional May 1970 CIA Memorandum.

(5) The fifth record is a CIA memorandum dated April 7, 1971 to the FBI listing Chomsky as having traveled to North Vietnam in April 1970 based on a search of "computerized and other files of the [Central Intelligence] Agency" and providing dates of Chomsky's travel in Laos and North Vietnam. This record illustrates that Chomsky's name and information were, at least at that time, in a retrievable file within CIA.

So what does all this mean?  A couple of quick points.

This leads to one of two conclusions.  Either:

(A) the CIA still has all of these records (and perhaps many more), but its search in response to the FOIA requests did not locate them.  While I guess it is possible some could be in exempt operational files, the publicly available documents raise questions about the CIA's organization of, and its ability to retrieve, its older records (the CIA has repeatedly resisted transferring its records to the custody of the National Archives within the reasonable time periods that other agencies do);

(B) as suggested in John Hudson's Foreign Policy piece piece, the CIA destroyed all of their copies of these records. On this possibility note that this would not necessarily have been easy given that some of these documents indicate that copies were filed in multiple places:

If they were destroyed, it does raise questions about compliance with the Federal Records Act (as the Hudson piece notes), although such questions about the CIA would not be novel (see, e.g., the 1953 Coup in Iran, the CIA tapes, etc.).  In the case of the Chomsky documents and some other CHAOS records about U.S. persons, there could be an additional explanation: they could have been "purged" to "protect privacy." In a section on CHAOS entitled "Maintenance of Files on Americans" (at p. 717), the Church Committee noted, for example, (emphasis mine),


To the extent that information related to domestic activity, its maintenance by the CIA, although perhaps not itself the performance of an internal security function, is a step towards the dangers of a domestic secret police against which the prohibition of the [CIA] charter sought to guard. Specific standards are required for the retention of such material when its direct availability in the CIA's own files is necessary for legitimate foreign intelligence purposes and the Agency has acquired it propertly. In addition, the CIA can be required to purge existing files in conformity with the new standards, and where appropriate, to purge name indexes as well.

This raises again the issue I previously discussed in relation to retention of surveillance information by the NSA.  The drive to prevent retention of, or purge, U.S. person data collected by intelligence agencies in order to "protect privacy" is in some tension with the value of retaining it for accountability purposes.  The Chomsky file is a good illustration. CIA may have purged its materials on Chomsky in compliance with guidelines theoretically designed to protect his privacy, but such an action has the negative effect of creating the impression -- now demonstrably false -- that the CIA never had any.
at 12:09 PM
Email ThisBlogThis!Share to TwitterShare to FacebookShare to Pinterest
Labels: access, CIA, document destruction, FOIA