The State Department released a press release today consisting of a "Joint Statement of the U.S.-Iraq Political and Diplomatic Joint Coordination Committee" reporting on a meeting today in Baghdad in which the "Governments of the Republic of Iraq and the United States reaffirmed their strategic partnership."

The press release states that during the meeting - "co-chaired by Iraqi Foreign Minister Hoshyar Zebari and U.S. Assistant Secretary of State for Near Eastern Affairs Ambassador Elizabeth Jones" - the "United States and Iraq discussed the ongoing process of repatriating archives and documents which are part of the patrimony of the Iraqi people." No further details are provided about the extent of those discussions, unfortunately, but the use of "archives and documents" is at least suggestive that the negotiations concerned both the Iraqi Jewish archives as well as the thousands of boxes of documents seized by U.S. forces.

The press release also notes that during the meeting the "United States praised Iraqi efforts to resolve Chapter VII issues regarding its relationship with Kuwait, in accordance with UNSC Resolution 833. The United States is committed to working with both Iraq and Kuwait to resolve remaining Chapter VII issues." Those issues include the Kuwait national archives missing since Saddam's invasion. As I have argued previously (see here and here), Kuwait's missing archives and the U.S.-seized documents today's State Department release calls "the patrimony of the Iraqi people" are not necessarily unrelated as the latter could potentially help locate the former. 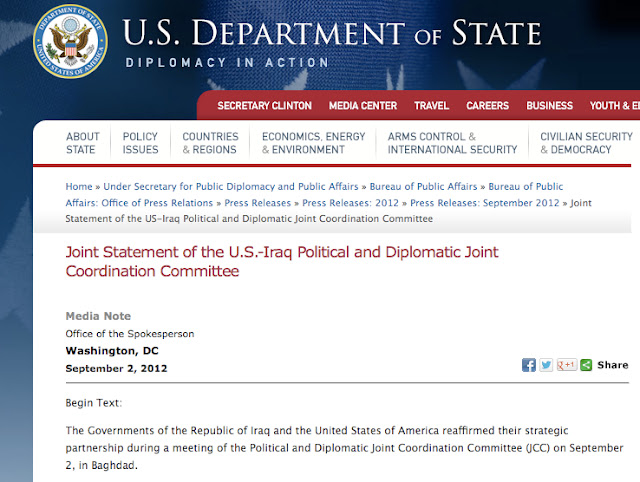