In a 1949 article in The Indian Archives called "UNESCO's Concern with Archives," the great Ernst Posner described in fascinating detail some of the negative effects on historical and social sciences research that derive from restrictions on access to archives.  Posner focused in particular on the problems of researchers who wanted to expand their research to include foreign archives, noting:


There remained throughout the 19th and 20th centuries a greater or lesser amount of discrimination against the foreign scholar desirous of using the archives of another country than his own. While this discrimination might be reduced to a minimum between allied and friendly countries it became manifest in cases in which relations between the foreign scholar's state and the state whose archives he wished to use were tense or unfriendly, and the governments would resort to a variety of delays and subterfuges to bar a foreign scholar from access to records they did not wish him to see.

Posner stated that the "use of records by a foreign scholar whose research topic was not looked upon favourably by the government of another country" could "be effectively prevented by means of delay and simple red tape" and provided, as just one example of many:


in the 1930's a German scholar, working on the devastation of the Palatinate during the campaigns of Louis XIV, applied and obtained permission to use the pertinent materials of the Archives of the French Ministry of War. When he arrived in Paris, however, he learned that his permit had already expired (although he had not been told that it was limited) and that he could not see the records. When he re-applied he was notified that the French Government was examining into the question of their publication and that therefore they could not be make available to a private searcher.

Posner's discussion of the negative effects of such access restrictions ended with a call to action:


It seems imperative to remedy this situation if we intend to achieve an internationally-minded interpretation of the past. How can we hope to arrive at textbooks that do not "poison the minds of children and young people" as long as access to the primary research material of history is contingent upon the nationality of the searcher and as long as records that may reflect unfavourably upon policies and activities of a state are reserved for the trusted, that is the nationality biased scholar? Free and equal access "by citizens of all countries" to archival materials must be guaranteed if their truthful and unbiased use, a prerequisite of truthful and unbiased treatment of past events, is to be guaranteed. (footnotes omitted).

In line with Posner's 1949 vision, the International Council on Archives recently adopted unanimously a document called Principles of Access to Archives at its August meeting in Brisbane (full-text is available here).  The Principles, developed under the leadership of Trudy Peterson, address a number of important access issues -- including a principle corresponding to Posner's specific concern, which asserts that archives should be made available "on equal and fair terms."

The 10 principles, which are defined and described in greater detail within the document, are:


1. The public has the right of access to archives of public bodies. Both public and private entities should open their archives to the greatest extent possible.

4. Institutions holding archives ensure that restrictions on access are clear and of stated duration, are based on pertinent legislation, acknowledge the right of privacy and respect the rights of owners of private materials.

5. Archives are made available on equal and fair terms.

6. Institutions holding archives ensure that victims of serious crimes under international law have access to archives that proved evidence needed to assert their human rights and to document violations of them, even if those archives are closed to the general public.

7. Users have the right to appeal a denial of access.

8. Institutions holding archives ensure that operational constraints do not prevent access to archives.

9. Archivist have access to all closed archives and perform necessary archival work on them. 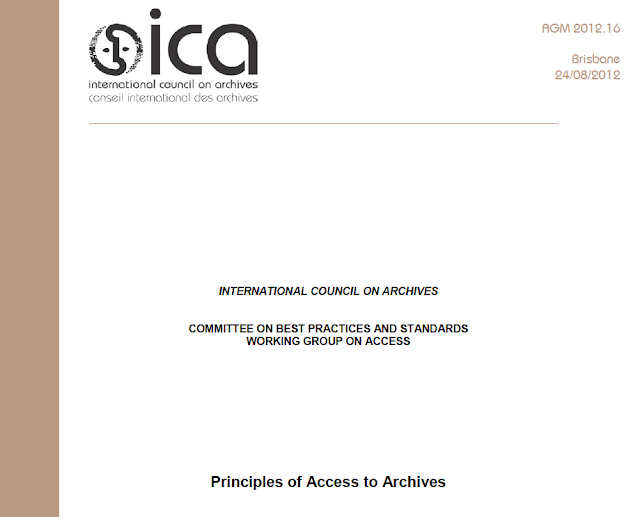