A brief update on the ongoing litigation in the Chabad v. Russian Federation case involving possible sanctions against the Russian Federation, the Russian State Library, and the Russian State Military Archives for failing to turn over a Jewish library and archives (for background see here).  After Judge Lamberth invited the U.S. government to opine on the issue of sanctions and the United Staes asked for an extension until Aug. 10 to formulate them, last week the U.S. government kicked the can again and asked for an additional extension until September 10, 2012 in order to "complete its deliberations."


As part of its deliberations in this matter, the Executive Branch felt it appropriate to consult with the parties. That process, however, has only recently been completed. The United States is now in the process of completing its internal deliberations with respect to the issues raised in the plaintiff's motion, in light of those consultations.

The U.S. government then "respectfully requests that any decision addressing the plaintiff's motion be deferred until it has completed its deliberations."

Also, for anyone interested in this case, Yale Law student Giselle Barcia has a Comment in the most recent Yale Journal of International Law called "After Chabad: Enforcement in Cultural Property Disputes" available in full-text here.  The article was written prior to Chabad's March 2012 request that Judge Lamberth impose the contempt sanctions that Chabad had voluntarily been delaying, but its raises some interesting and highly relevant issues about the problems of enforcement in cultural property disputes.  Barcia states:


Chabad's struggle to enforce the U.S. decree escalated from a legal dispute to a political and cultural public relations battle between the two countries. The protracted conflict had a profound impact in the art world as well as the political world. It resulted in diplomatic tension between the United States and Russia, inefficiencies in the market for art loans, and, accordingly, decreased access to cultural property. The post-judgment conflict in Chabad also exposes a gap in cultural property law: an abscence of clear guidelines on enforcement. It suggests that the existing options for enforcement are inappropriate for international cultural property disputes. Although cultural property law perhaps rightly focuses on dispute prevention, it must also provide an enforcement mechanism for international "conflicts of culture" litigation. (footnotes omitted) 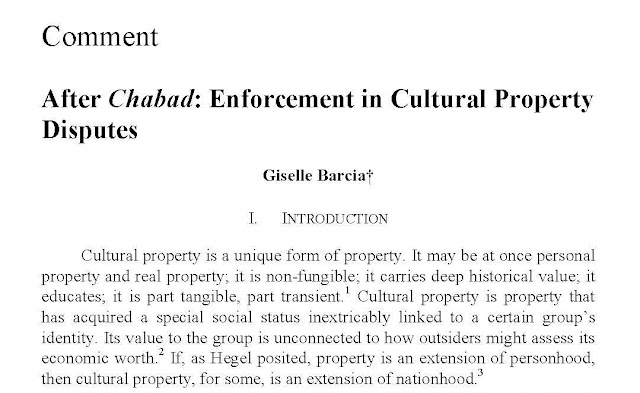