With regard to progress made in the matter of Kuwaiti property and the national archive, Iraq has returned some Kuwaiti property belonging to certain Kuwaiti Government authorities and, in December 2011, established a ministerial committee to follow up on this matter. However, this committee has not presented any reports on its work. The fate of the Kuwaiti national archive, which includes important documents pertaining to the Amiri Diwan, the Diwan of the Crown Prince and the Diwan of the Prime Minister, remains unknown.

The references to specific collections of archives, although very general, is more detail about the missing archives than is normally given.  Back in 2000, Kuwait did submit this more detailed list of the archives it sought.  The list of archives and records Iraq claimed to have subsequently returned to Kuwait in 2002 is enclosed here.

Kuwait News Agency coverage of Al Sabah's letter is here.  Previous coverage of the controversy over the missing Kuwaiti national archives is here, here, and here. 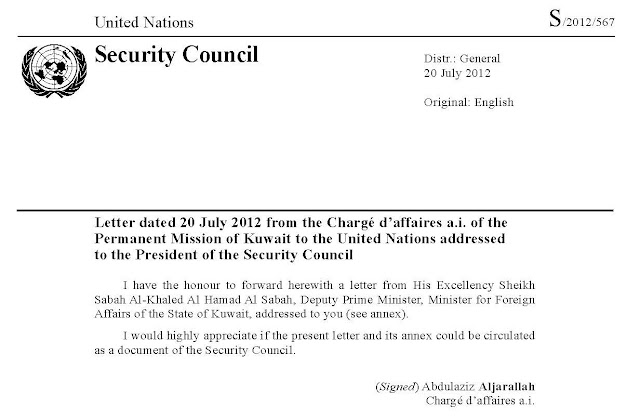