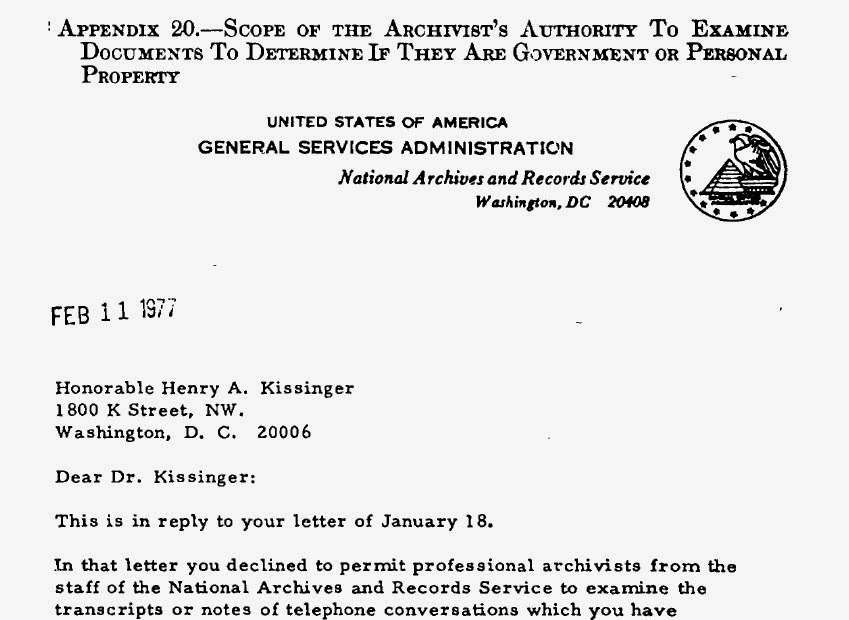 [UPDATE: I have changed this to the past tense, given that Clinton has now confirmed that she destroyed all of the other emails]

While there is already more than enough analysis (some very good, some less so) of the Hillary Clinton email controversy, there is a strikingly similar precedent that clearly illustrates what the appropriate - and perhaps even legally required - solution should have been: an independent National Archives review of all of Clinton's emails to determine which were properly considered federal records. That precedent is Henry Kissinger's removal of transcripts of this telephone calls from State Department custody almost 40 years ago (which are - thanks to the National Security Archive - once again involved in litigation).

But you know who didn't approve nearly 40 years ago?  The Archivist of the United States.  Upon learning of the Kissinger transcripts, then Archivist James Rhoads sent this Jan. 4, 1977 letter to Kissinger stating that he believed statutory duties under the Federal Records Act "require that I conduct an inspection" of the transcripts to "verify the conclusions made [by the State Department] and actions taken concerning them" (emphasis added).  Rhoads attempted to "enlist" Kissinger's "cooperation in permitting qualified archivists from my staff to be given the opportunity to examine the telephonic transcriptions" in order to "determine whether such materials are, indeed, personal property or whether some portions of them may be Federal records."  The Archivist also guaranteed "the protection of any confidential information which these archivists may encounter during their inspection."

On Jan. 18, 1977, Kissinger rebuffed the Archivist by enclosing both a letter Kissinger had written to Congress that reasserted that "Counsel to the Department of State has thoroughly reviewed the applicability of Department of State regulations to these papers, and has advised that under these regulations and other legal authority, the papers are personal" as well as a memo directly from the State Department Legal Advisor arguing that the Archivist's proposed review would be inappropriate for a variety of (creative, but unpersuasive) reasons.

The Archivist was undeterred and sent back this Feb. 11, 1977 letter in response which enclosed this 12-page legal opinion from the General Counsel of the General Services Administration that analyzed, in part, largely the same federal records laws that govern today (as explained below, current law in fact is even stronger) and concluded that the Archivist not only had the legal authority, but the responsibility to conduct an independent review.

In-fighting within the government continued and, as in the current situation, there was an explosion of FOIA litigation which complicated things further.  For a brief period of time in 1978, however, a National Archives archivist was allowed to look at a limited sample of the original Kissinger transcripts and the results, although kept quiet, were clear:

Ultimately the debate between the Archivist - who continued to insist upon a full review by the National Archives - and the State Department ended up being resolved by the office that has become famous for its poorly reasoned, "definitive" interpretations of the "law" for the executive branch - the Department of Justice's Office of Legal Counsel.  In January 1981, the OLC sided with the State Department and held that the law did not authorize the Archivist to make determinations that have a "binding effect" on agencies on the question of "whether a document constitutes a 'record.'"  In short, the OLC concluded that the State Department had the authority to make the ultimate decision about whether the transcripts were personal papers of Kissinger or federal records and the Archivist was kicked to the curb.

As I explained recently, however, last year Congress finally - and rather directly - corrected and repudiated the OLC's erroneous Kissinger opinion by amending the federal records laws to state expressly that the "Archivist's determination whether recorded information, regardless of whether it exists in physical, digital, or electronic form, is a record . . . shall be binding on all Federal agencies."  Unlike the other provisions of the same law that specifically relate to the use of private email by agency officials, there is not a problem of retroactivity with this part of the law - a review by the Archivist in order to make determinations about which of Clinton's emails constitute federal records would take place now.

A National Archives review would have been advantageous by providing a solution to the controversy that was more likely to be seen as independent and non-partisan.  Unfortunately, views on the importance of the federal records laws seem to vary greatly depending upon whether the "records" at issue are Kissinger's telephone calls, emails of John Yoo, Lois Lerner, or Clinton, or CIA videotapes.  They all raise the same question: who gets to decide what is a "record"?  The proper answer - especially in high profile cases that threaten accountability and the historical record - is the Archivist.

Indeed, the consistent emphasis in the current debate on law and regulations specifically referencing email largely misses the larger point: emails can be federal records just like hardcopy letters, telephone transcripts or videotapes.  The narrative that it was not "technically" illegal for the Secretary of State to send emails from a private address ignores the more important general obligations governing federal records which make clear that concealing (or destroying) or removing federal records from agency custody is not legal and can even be, when there is requisite intent, a criminal act.

Finally, according to one report, the National Archives has already reached out to the State Department "to ensure that all federal records are properly identified and managed in accordance with the Federal Records Act and that controls and procedures are in place to manage records effectively in the future."  Clinton's new revelations raise new questions that call out for more aggressive questions.
at 3:55 PM
Email ThisBlogThis!Share to TwitterShare to FacebookShare to Pinterest