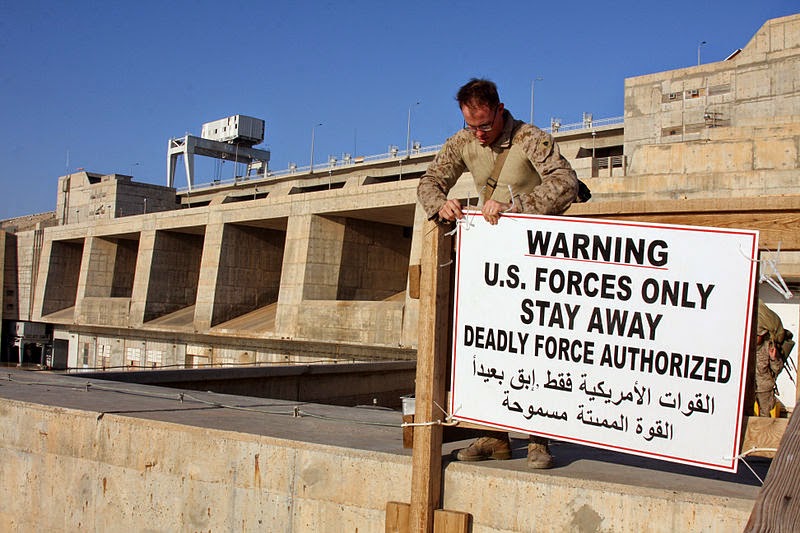 Based on documents recently obtained via FOIA, there are still two open inquiries by the National Archives and Records Administration (NARA) into the possible unlawful destruction or removal of records related to the killings of 24 Iraqis in Haditha in November 2005 - 9 years ago this month. Despite a letter from the Marine Corps in mid-2013 that purported to finally respond to the inquiries -- which, as I'll explain below, is completely inadequate -- NARA has not closed out the inquiries, nor should it.

The first unauthorized destruction inquiry began in August 2006 following a New York Times article entitled "Marines May Have Excised Evidence on 24 Iraqi Deaths" which stated that an investigation by Maj. Gen Eldon Bargewell had uncovered, among other things, possible tampering with a unit log book "which was meant to be a daily record of major incidents the marines' company encountered" but which "had all the pages missing for Nov. 19, the day of the killings, and that those portions had not been found."  The initial NARA inquiry letter is here.  (As an aside, the fact that NARA had to learn about this from a news article is arguably itself evidence that the Department of the Navy/Marine Corps "did not follow the law").

The second inquiry began in December 2011 (NARA letter here) following another stunning New York Times article entitled "Junkyard Gives Up Secret Accounts of Massacre in Iraq" that was based on 400 pages of classified interviews related to an investigation of the Haditha killings found in an Iraqi junkyard where they were being burned by local Iraqis. 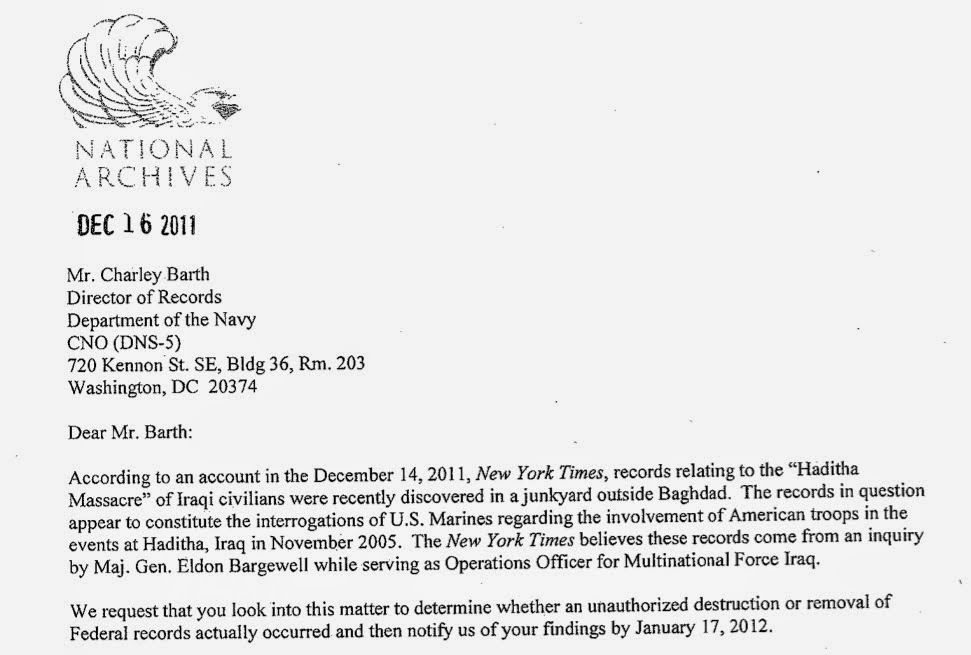 In both cases the Department of the Navy initially responded to NARA by stating that a substantive response would have to yield to ongoing Naval Criminal Investigative Service (NCIS) investigations (2006 letter and 2011 letter).  Yet released emails (see, e.g., here) also show that it was thereafter left to NARA to attempt repeatedly to follow up on its inquiries.   The Navy and Marine Corps appeared both disorganized and dismissive of the NARA inquiries.  In one 2012 email, for example, the Navy asked an inquiring NARA representative, "Who is lighting the fire on you at NARA?"

Finally, last year a May 30, 2013 memorandum from the Commandant of the Marine Corps (signed by the Director of Marine Corp Staff) purported to address, at last, both NARA inquiries. The memo simply stated, however, that "regarding alleged destruction of records, a thorough and extensive review of available documentation and previous investigations was conducted.  As a result of this review, there were no findings which revealed destruction or unauthorized removal of records" (emphasis mine).

A superficial reading of this carefully-worded paragraph might give the impression that the Navy/Marine Corps actually investigated the questions posed by NARA.  Instead, it appears -- as the letter in fact states -- that they simply reviewed the "documentation and previous investigations" into the Haditha matter generally and there were "no [formal] findings" of "destruction or unauthorized removal of records."  This is supported by an email exchange that preceded the formal response in which NARA tried to clarify whether the Navy had actually completed an "investigation into the alleged destruction of Haditha records" and the Navy representative responded that it was the "investigation into Haditha in general."  This is wholly inadequate for several reasons.

First, the lack of a specific relevant "finding" in one of the various criminal investigations about the Haditha killings is irrelevant unless one of them was tasked specifically with looking at, and reporting back on, whether there was an unauthorized destruction or removal of federal records, regardless of whether it justified criminal charges.

Second, to the extent the records of those investigations are public, they do appear on their face to show records destruction.  The 2006 New York Times article, for example, indicated that the destruction of evidence related to the log book arose in the context of the investigation by Gen. Bargewell.  The text of the resulting report was later made public here and it does include sections indicating possible destruction of records relating to a log book, including this one:

A more detailed accounting of these facts would be available in the interviews to which the footnotes above cite as well as other materials cited in the report, but they are not publicly available (so far as I am aware).  Additional evidence on this point also comes in the form of a subsequent Article 32 hearing in 2007 for CPT Randy Stone, in which 1SG Albert Espinosa testified that the "log books from Nov. 19 were incomplete or missing." In the case of the 2011 NARA inquiry, the factual predicate is even more easily verified: the New York Times has copies of classified federal records they obtained from an Iraqi junkyard!

To be clear, it would be possible for the Navy/Marine Corps to have investigated these claims specifically and to have concluded that there was insufficient factual support to conclude that pages in the log book were destroyed at all or to conclude that the destruction of the records in the Iraqi junkyard -- while undertaken in an incompetent manner that created a serious security incident -- was not unauthorized records destruction because they were disposable reference copies or otherwise covered by an approved records schedule.  But there is no indication that this is what occurred, despite years of delay.

The larger point is that in cases such as this, where publicly available evidence clearly supports at least a prima facie case of unauthorized destruction, NARA ought to require agencies to explain what investigative steps were undertaken and describe its analysis in determining whether or not the destruction was unauthorized, rather than an inexplicable, conclusory response of "no unauthorized destruction."  Part of the value of these NARA inquiries is to identify agency misinterpretations and misapplications of the federal records laws in order to remedy them to prevent more widespread destruction.

To NARA's credit, despite the May 2013 letter from the Marine Corps, NARA continued to list both inquiries as still open as of the end of fiscal year 2013 and, based on the results of recent FOIA requests, nothing has changed.

Finally, while the significance of these NARA inquiries extends far beyond the question of missing pages in a unit log book or some binders in a junkyard (as mentioned above), those missing pages are more than important enough.  If the IRS undertook Herculean efforts (see pp. 5-7 in the attachment) to try to resurrect probably meaningless emails of Lois Lerner, surely we can expect the United States Marine Corps to provide a meaningful response to NARA regarding records relevant to a horrific event in which 24 human beings were killed and for which Marines were charged with crimes.  Even though the criminal investigations may be finished, for the historical accounting for Haditha - which is already mentioned in the same breath as My Lai - every record counts.
at 2:49 PM
Email ThisBlogThis!Share to TwitterShare to FacebookShare to Pinterest
Labels: document destruction, Iraq, preservation, U.S. Navy