Last month the U.N. Secretary-General submitted to the U.N. Security Council his 34th report (here) pursuant to paragraph 14 of U.N.S.C. Resolution 1284 from 1999 that deals, in part, with the issue of Kuwaiti national archives that have been missing since Saddam's 1990 invasion of Kuwait (coverage of the 33rd report is here and the 32nd report here).

In the new report, the Secretary-General again concludes that "no significant progress has been made in the search for the national archive of Kuwait, nor has credible information about its fate or whereabouts emerged," but nevertheless concludes that "Iraq has demonstrated, by finding other missing Kuwaiti property, that its credible and sustained efforts were bearing results."

First, in addition to the special Iraqi committee focused on the search for the Kuwaiti archives that was set up in late 2011, there is also now a special Kuwaiti committee on the missing archives "chaired by the director of the international organizations department of the Foreign Ministry." The Kuwait committee is apparently awaiting "an indication from Iraq on when both entities could meet in order to further work on the search for missing Kuwaiti property."

Second, on June 27, 2012, Iraq returned to Kuwait "27 crates containing tape recordings belonging to the archives of Kuwait Radio" and "two books belonging to the University of Kuwait." Both sets of materials "had been seized by the former Iraqi regime during its occupation of Kuwait in 1990."  The protocols for the return of these materials (enclosed within the 34th report) noted that:

this partial recovery of property was undoubtedly a step forward, and that the Kuwait side hopes that it will be followed by the return of more valuable and significant property, including, in particular, the national archives belonging to the Amiri Diwan, the Diwan of the Crown Prince and the Ministry of Foreign Affairs.

Elsewhere in the report the Secretary-General briefly summarizes the progress made since the first Secretary-General report in 2000 on the "the return of all Kuwaiti property, including archives, seized by Iraq." Interestingly, he mentions only more recent examples of the return of "the archive of official Kuwaiti television and radio stations, microfilm archives of Kuwaiti newspapers" and expressly notes that there has, however, been "little progress in the search for the national archive" while failing even to reference the 425 boxes and 1,158 bags of documents returned to Kuwait in late 2002 (described in the Secretary-General's 10th report, see paras. 36-75).

Third, the report encloses translations of the advertisements that the Ministry of Foreign Affairs of Iraq published in national newspapers last year urging people to come forward who may have information on the missing Kuwaiti national archives:

Finally, the report notes that, as a result of a series of negotiations, the issue of the missing Kuwaiti property would no longer be overseen by a U.N. High-level Coordinator (the most recent of which was Ambassador Gennady Tarasov, whose mandate was to expire on December 31, 2012), and the responsibility going forward would be transferred to the U.N. Assistance Mission for Iraq (UNAMI).  The U.N. Secretary General expressed confidence that UNAMI was "particularly well suited for this task." 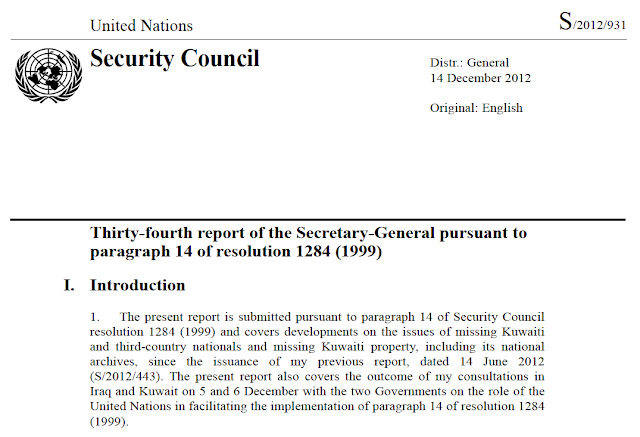