Where are the Original Seized Grenada Documents?

Two interesting new developments related to documents seized by U.S. forces in Grenada in 1983 during Operation Urgent Fury - one is a fully declassified National Security Directive newly available online and the second are meeting notes recently obtained via FOIA that indicate that at least some original documents from Grenada remain at the U.S. National Archives.  But first a quick administrative note: beginning with this post I am experimenting with enabling comments at the bottom of the post after receiving requests from some readers.

A big thanks to Steven Aftergood who alerted me to a new, fully declassified version of a November 1983 National Security Decision Directive signed by President Ronald Reagan called "Processing and Disposition of Documents Acquired by US Forces in Grenada" that is now available online from the Federation of American Scientists here.

An earlier redacted version that has been online for years (available here) already provided an interesting illustration of the breadth of issues for which the captured documents from Grenada were thought to be relevant.  The three paragraphs that were redacted in the earlier version, but which are available now, relate to the following issues:

First, is the issue of U.S. classified documents found among the documents captured in Grenada:

This may have been redacted given that such documents could present special sensitivities as they could be relevant to counterintelligence investigations, including the possibility that someone within the U.S. government had provided access to them.  A related issue came up when the interagency intelligence exploitation team -- assembled pursuant to Reagan's directive -- submitted its initial evaluation of the captured documents in December 1983.  In the last paragraph of a cover memo (available here) from Robert Gates, then Chairman of the National Intelligence Council, to Robert MacFarlane, then Assistant to the President for National Security Affairs, Gates noted:

Mr. Roy Godson of your staff informed us that there was great interest in the "American" connection to the documents. We have discussed this with the FBI liaison contact and propose that you task the Attorney General directly with pursuing this issue. We do not think a discussion of the involvement of US citizens in Grenada should be included in any paper prepared by the Intelligence Community.

The initial version of the "Interagency Intelligence Assessment" enclosed with that memo entitled "Grenada: A First Look at Mechanisms of Control and Foreign Involvement" is here and a later updated version from August 1984 is here (both courtesy of the CIA FOIA reading room).

Second, there is a previously redacted paragraph dealing with the interesting topic of forensic examination of the captured documents including even the type of paper and ink used:

This provides another example of a situation in which copies of captured documents are inadequate substitutes for originals. As discussed in an earlier post, the forensic exploitation of captured documents and media has been increasing in importance over time.  See, as an example, this FBI  Laboratory report from 2008 about documents seized from Afghanistan.

Third, the final, previously-redacted paragraph relates to the question of returning the documents:

The issue of the return of the documents leads to the second development . . .

The original documents seized in Grenada were, according to everything I had ever seen, returned to Grenada long ago.  No less than The Guide to Federal Records in the National Archives of the United States expressly states in a note in RG 373: "The original Grenada documents have been returned to the Grenadan government" (microfiche copies are in RG 242).  There has been a bit of a mystery about what happened to them upon their return - see, for example, the Grenada Revolution Online's informative page on the documents here which states:

Rumor at one point put the original Grenada documents in Grenada around August 1985 and housed at Police Headquarters. Since that time was the damaging passing over Grenada of Hurricane Ivan, 7 September 2004. The location, condition and accession of the original Grenada Documents remains obscured, to say the least.

Given this, it came as quite a surprise when I recently received some documents via FOIA that included notes from recent meetings involving the National Archives that contained notations such as this:

which appear to indicate that there are original Grenada records at Archives II in College Park.  The note "why are the originals here" even suggests some surprise on behalf of the undisclosed notetaker.

To be clear, this is not necessarily inconsistent with the return of most, if not almost all, of the originals to Grenada. The notes above could perhaps be referring to a small number of documents that may have been withheld from the original return -- possibly for some of the same reasons the passages in Reagan's directive had been redacted or based on other "national security" concerns.  There is also a State Department records schedule, N1-353-90-3 (available here), related to a "Grenada Task Force" that identifies "3-4 feet" of captured documents (perhaps original) that were transferred to NARA, which could provide another explanation:

Despite these possible explanations, the notes nevertheless raise some interesting questions that would profit from clarification. If anyone has additional information about original Grenada documents in the U.S. or the fate of those returned to Grenada, I'd be grateful to hear from you. 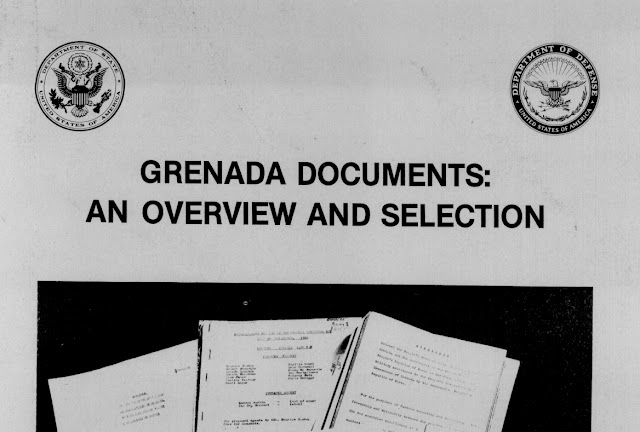